This is a trip report from the Phi Phi Islands Tour by Speed Boat – we took the normal tourist tour, not a special trip for agents. All images were taken on that day in August, with the exception of the first few shots at the pier, as I forgot to get my camera out! These are however typical morning scenes. August is low season, but luckily we had excellent weather; from Dec – Feb expect far more people, and calmer seas.

The day begins as we meet up at Nopparat Thara pier – this is the main start point for dozens of island tours from dozens of operators in Krabi. Vans pull up regularly and offload more passengers at the pier and although, with hundreds of people milling around, it looks like chaos, it is actually fairly well organised with different groups being shunted off to different tables where you present your voucher and receive a sticker to say which itinerary / boat you will be on that day. 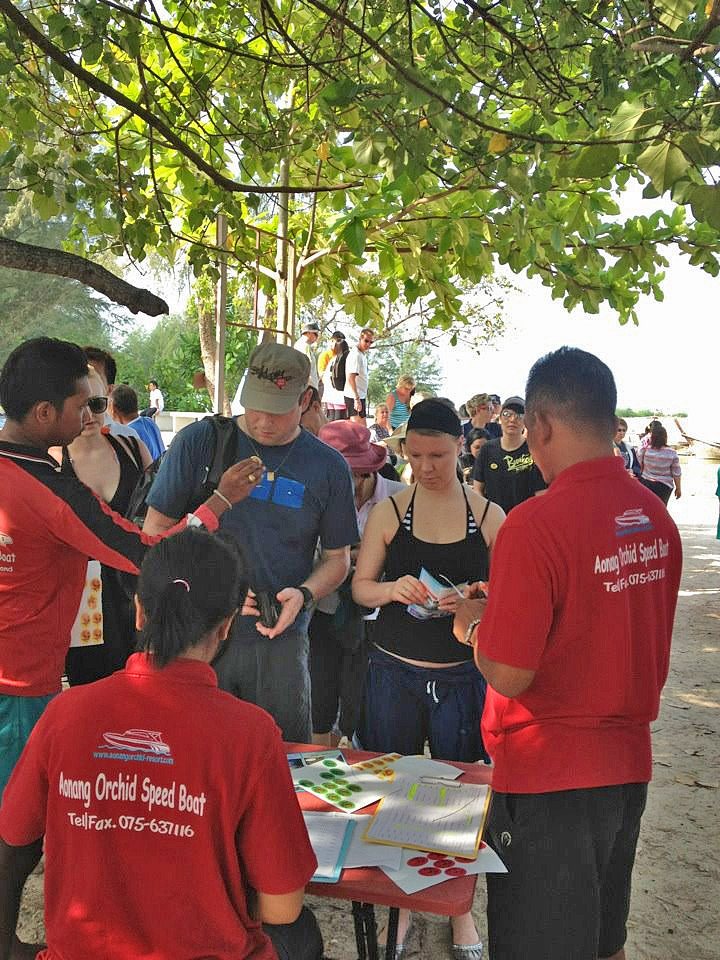 After some waiting around for everyone to arrive, it’s time to board. Organised chaos again, as the speedboats from different companies are all lined up in a long row ready to go. 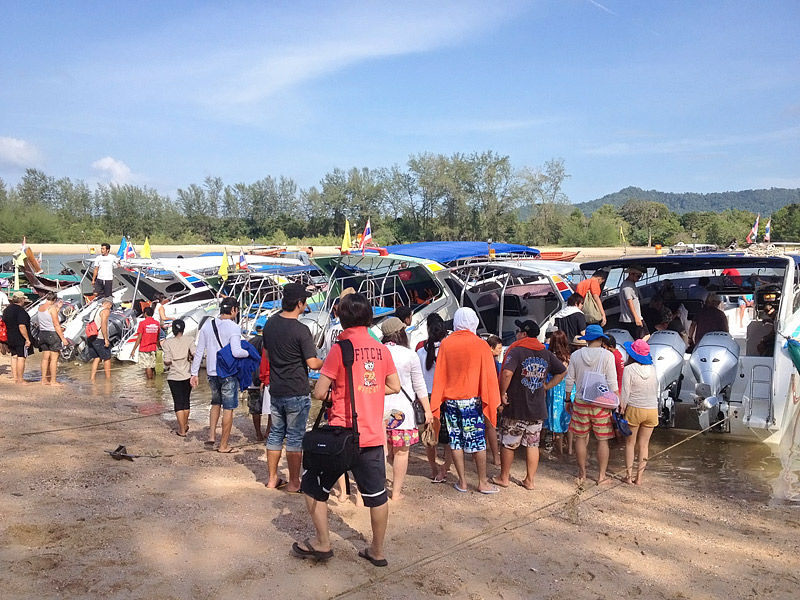 Tip: board as early as you can – note who your guides are at “check-in” and stay vigilant for them to start calling people to the boat – as the best seats (at the side and front) fill up first. The picture below shows the 45 seater boat we were assigned. The people in middle seats can see nothing at all. The people at the front (at the bow, out past the driver) get the best view, but it’s the most bumpy ride (see below). We sat on the bench at the sides, which at least gives the option to kneel up and see outside. It’s not possible to get up and walk around when the boat is moving. 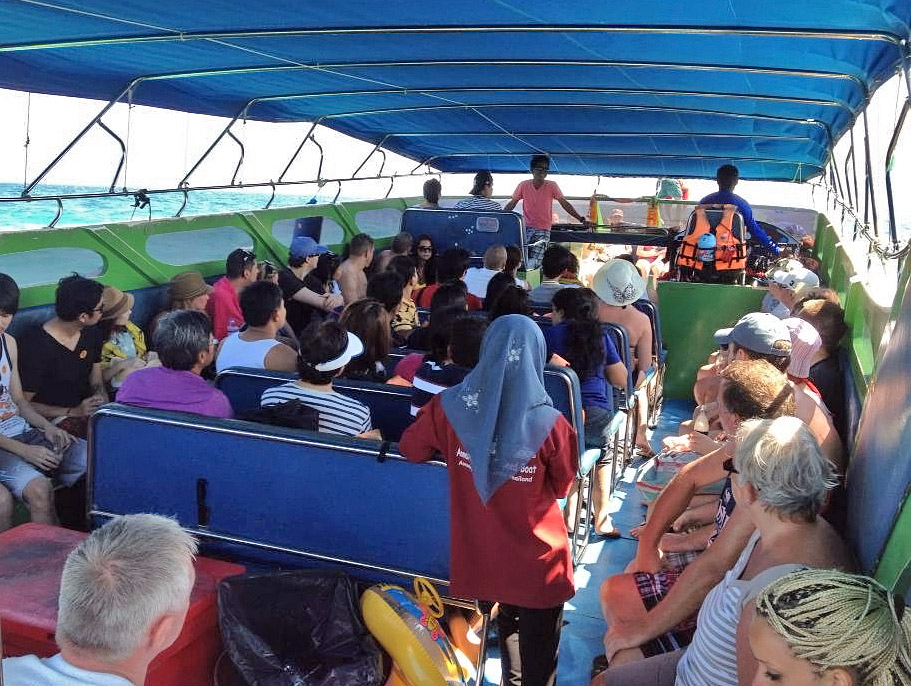 The view is quite nice en route, going past various islands – below you can see Koh Si and Koh Ha – though it’s tricky to take photos due to all the bumping up and down. Hold on tight to any young children. 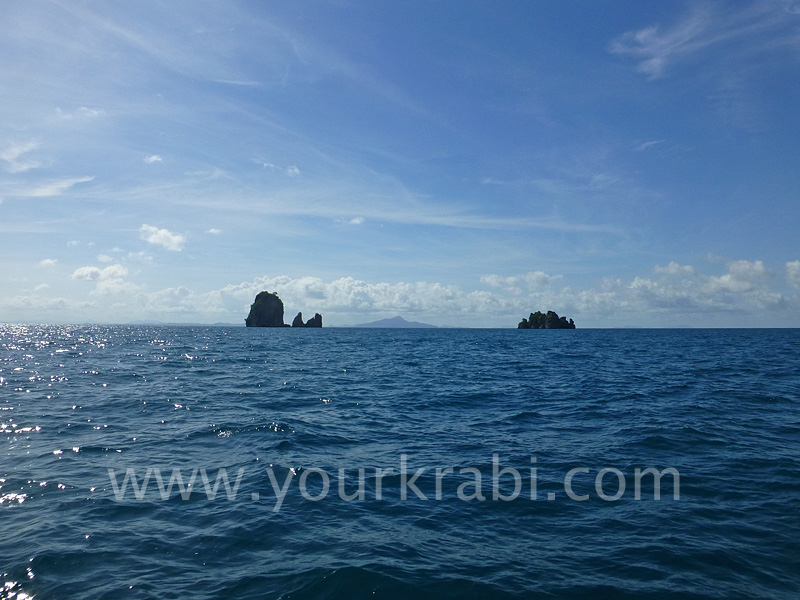 After about 40 minutes we reach our first stop, Bamboo Island (or Koh Pai). Hooray! Our operator is the first boat there and for a blissful 10 minutes we have this perfect tropical island to ourselves. Yes, the sea and sand really are this bright and clear. 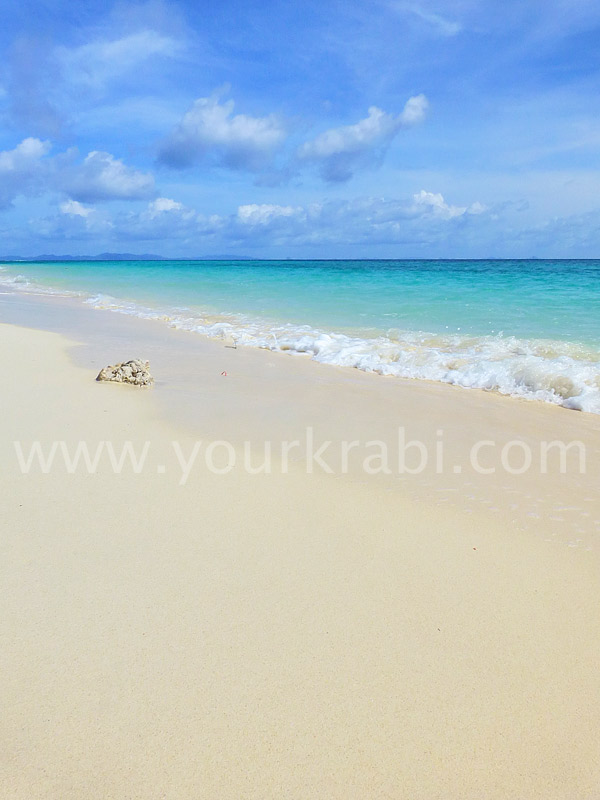 The beach wraps around most of the island and there is plenty of shade where you can relax. You can also swim or spot the island’s resident monitor lizards and wading birds. 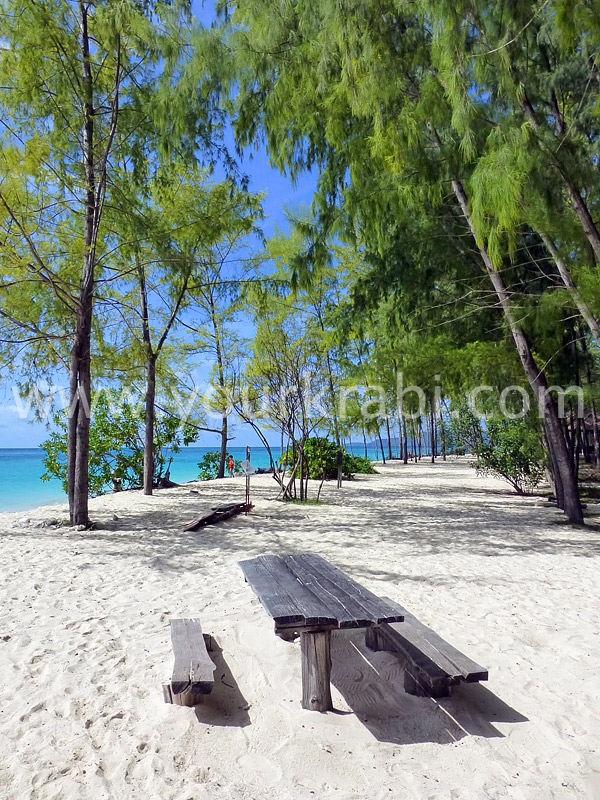 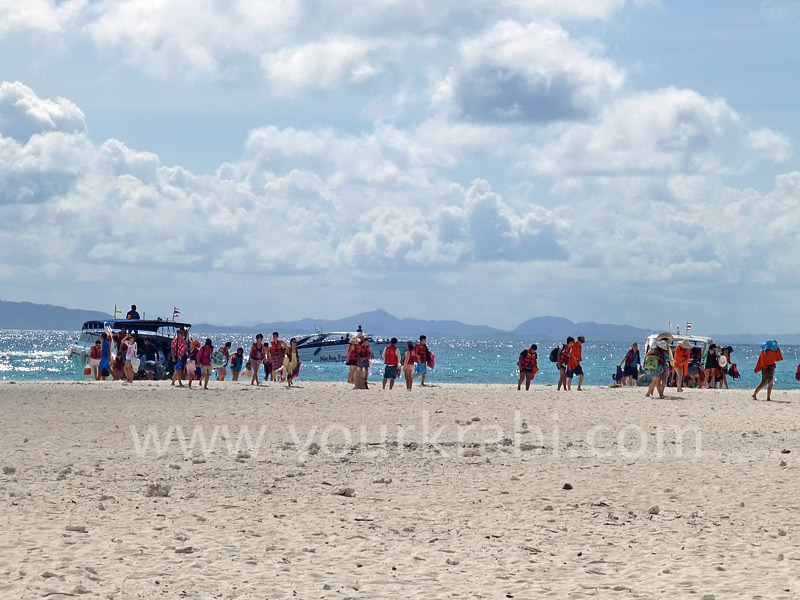 Ah well, at least we saw it in a pristine state for a few minutes. We spend about half an hour or so here, then it’s time to get back into the boat and head for Phi Phi Leh. It was already quite hot, so we grabbed some water from the big ice box before sitting down. We cruise past Phi Phi Don, the main (inhabited) island in the group, where we will be going for lunch, but do not stop there. When we reach the towering cliffs of Phi Phi Leh, we slow down and eventually stop outside this unassuming place. 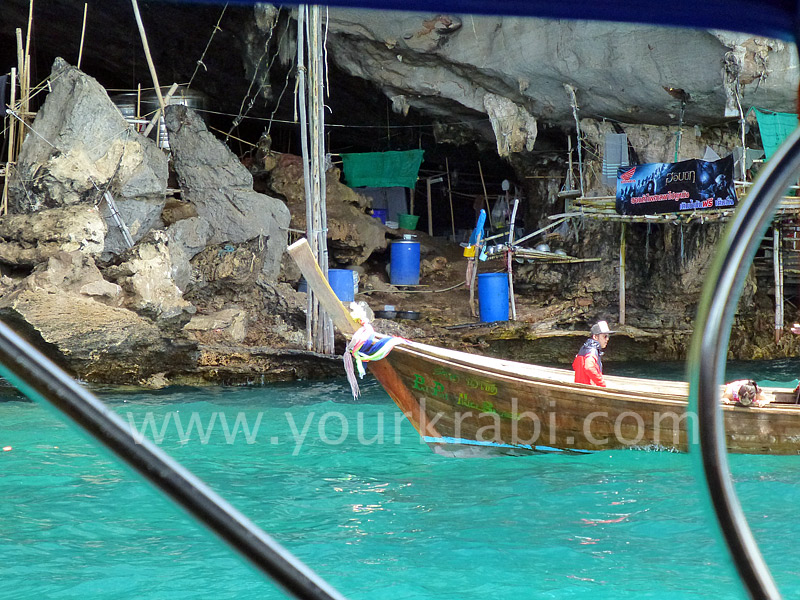 I see bewildered looks on fellow passengers’ faces as the guide explains that this is Viking Cave. Huh? Some ramshackle scaffolding across a hole in the rock with a bunch of unattractive awnings and plastic jerrycans hanging off the front? Yes, that’s it folks. Snap your picture and let’s move on. I was lucky to have visited at a time – many moons ago – when visitors were still allowed inside the cave and I can testify that it is in fact a spectacular and very high cavern, with ancient paintings that some believe to be Viking ships – hence the name. It is also a place where swifts like to nest, and the birds’ nest collectors who live there year round don’t take kindly to flash bulbs and loud voices disturbing their source of income, so access has now been cut off.

The boat moves on and we see the incredible shifting landscape of the karsts and the vivid hues of the sea. As we round the coast we arrive at Losamah Bay and the Bileh Lagoon. Here the boat slows down to a crawl and most people (even the middle rows!) get to their feet to snap photos of the beautiful cliffs and sparkling water. 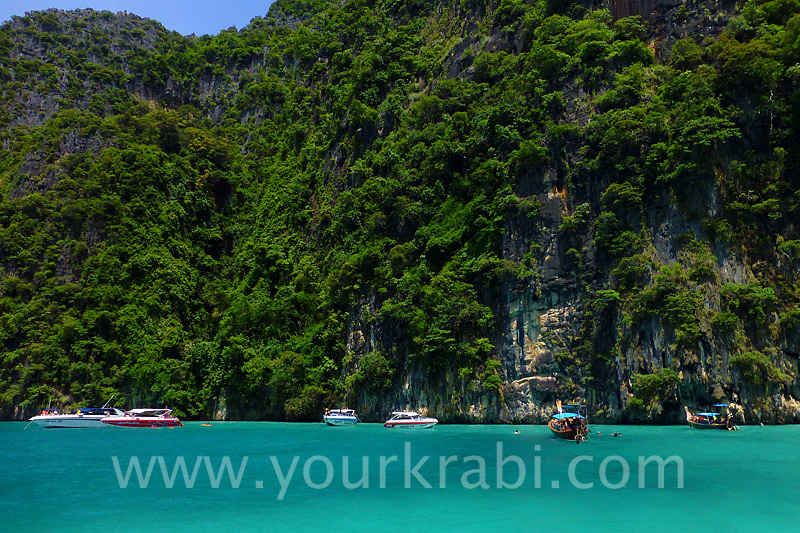 Further along the coast we enter the legendary Maya Bay, almost completely encircled by rocks. From certain angles on the beach it looks as though it is fully enclosed, which is why it was chosen as the setting for The Beach movie, as the story revolves around an undiscovered paradise at the centre of an island. Sadly these days, Maya Bay is far from undiscovered. Today, there are already hundreds of people lining the sand, which looks narrow due to the high tide. 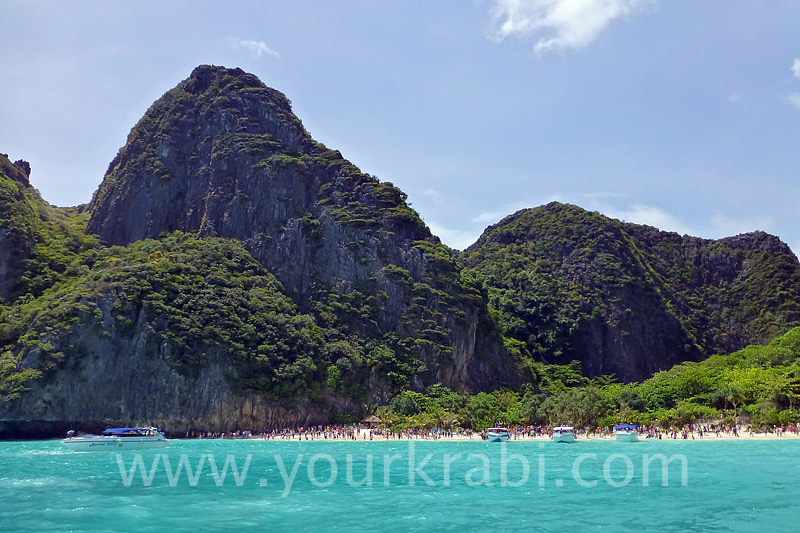 Annoyingly, we are not able to stop on Maya Beach itself today. The captain makes the decision based on the waves, which are making the boat rock quite considerably even at standstill. Unfortunately, this happens fairly often in low season, as Maya Bay is on the “exposed” side of Phi Phi Leh and gets strong waves from the open water. Outside of monsoon season, you will always be able to moor up on the beach and have some time to explore. It is beautiful.

Instead we continue along the rocky coast, cross the narrow channel between Phi Phi Leh and Phi Phi Don, and make a final stop at Monkey Bay where it’s time for some snorkeling. Most people wear life jackets as the current is quite strong at this time of year. There are quite a few fish to be seen – I spot parrot fish, sergeant majors, moorish idols, banner and angel fish, as well as sea urchins and giant clams – but nothing to excite a seasoned snorkeler. 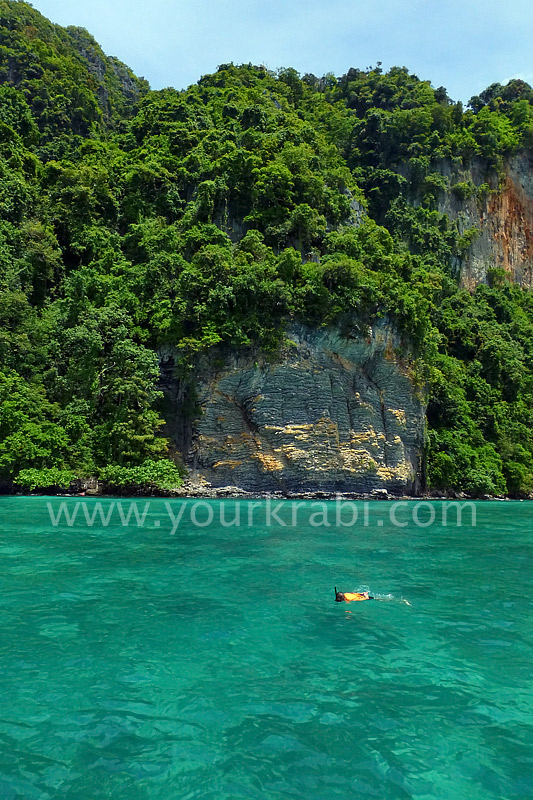 The snorkeling stop lasts around 30 – 40 minutes by the time everyone has come back on board. As most people seem to be starving, it’s a good time to head around the coast to Tonsai Bay, where we will dock for lunch. All day trip tour boats that stop here must eat at the Arida canteen (pictured below). There is no good reason for this, it’s just always been this way. It’s been expanded over the years and now seats what looks like up to 500 people or more. 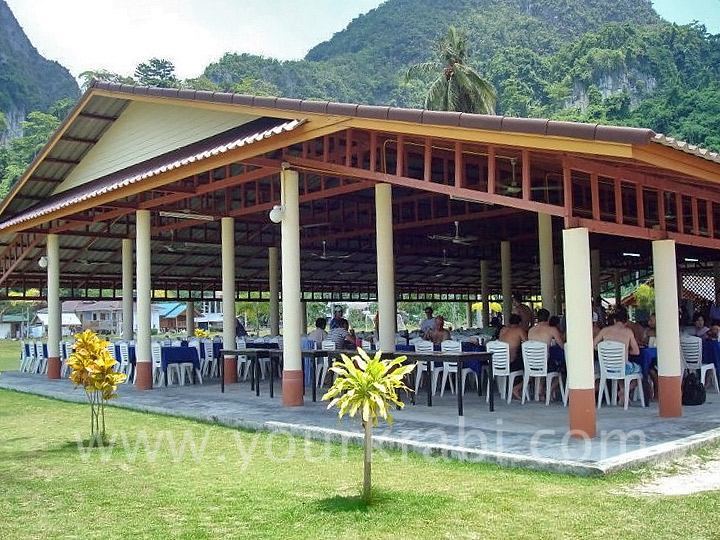 The food is served buffet style, with around 8-10 different dishes, all bland Thai food plus a spaghetti and tomato sauce option for those who don’t want rice. It’s edible, filling, and hygienic which I suppose are the most important things when you are hungry and on a boat with no toilet. (There are also clean bathrooms on site for those who need them). Tasty and delicious it is not. 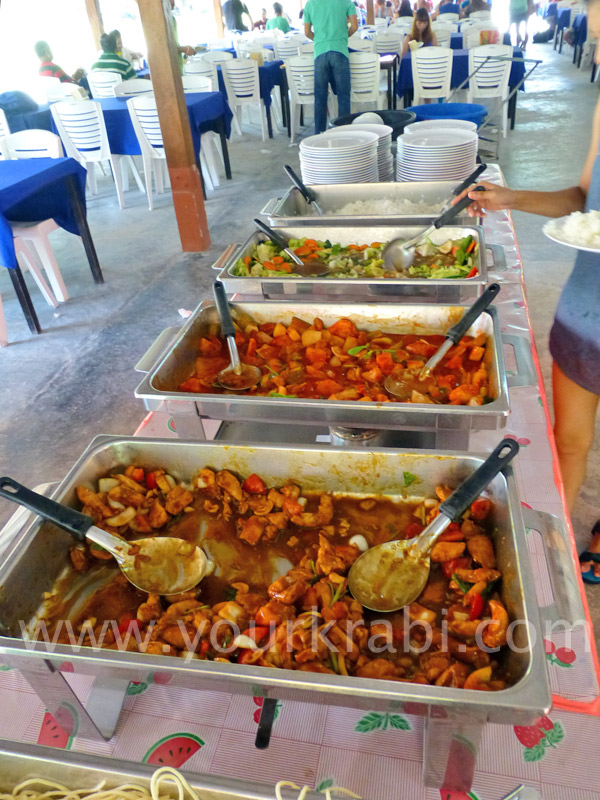 There’s also a fruit buffet, tea and coffee and soft drinks included. The canteen is run by a Muslim family so all food is Halal. 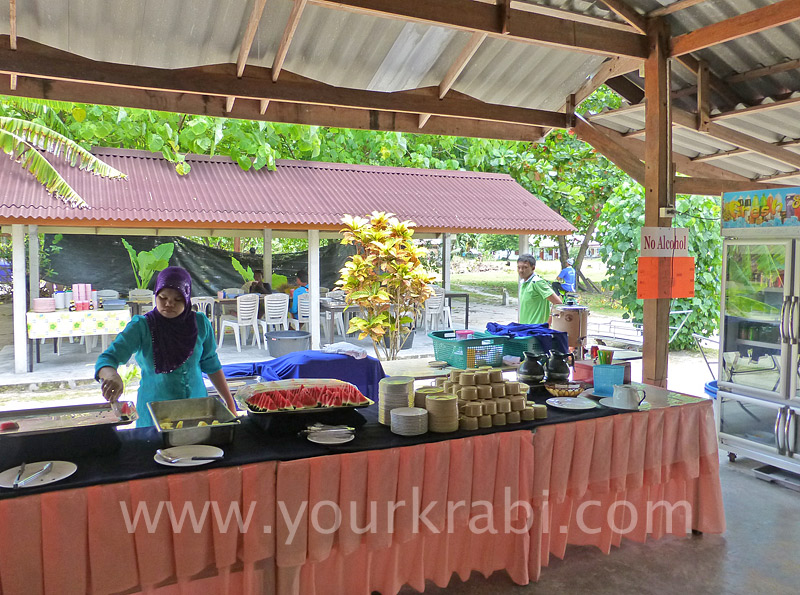 After lunch we have an hour or so break to explore the island on our own. There’s plenty to see in the little “town” of higgledy-piggedly streets. Note there are no cars in Phi Phi, the locals tend to get around on bicycles, though a few also have motorbikes, so watch out for them! 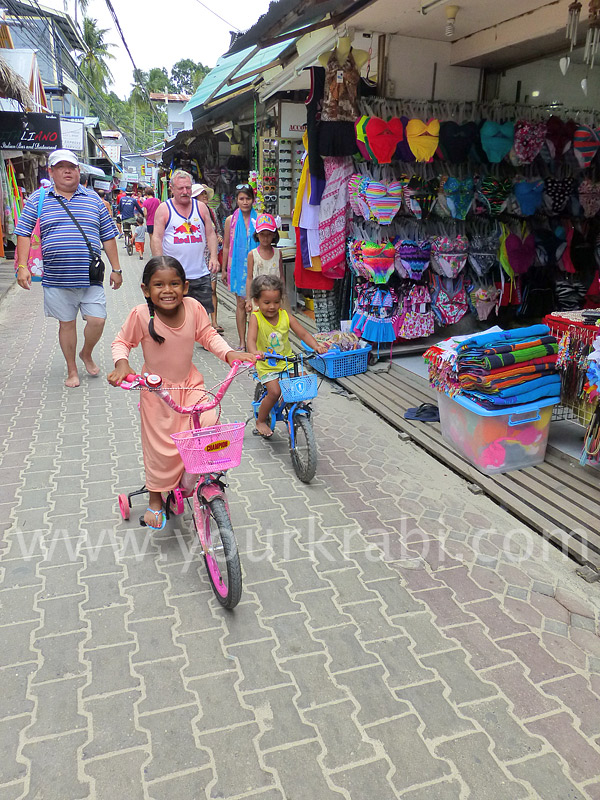 Most people do a spot of shopping, or (another top tip) you can also bail out of the tour lunch – be sure to inform your guide first – and head directly into the town where you will find any number of eateries, from seafood to pizza, where you can have your meal. There’s no refund for this option, but it will generally be better than the canteen fare. 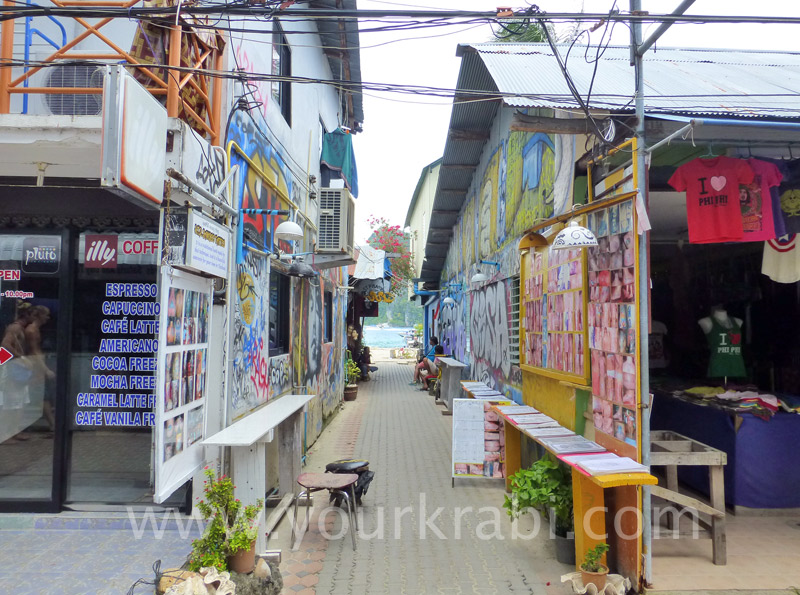 There are also two beaches to relax on, one on either side of the narrow strip of land. We choose Lohdalum Bay, as the quieter of the two. There are kayaks for rent here as well, though you won’t get very far in an hour! 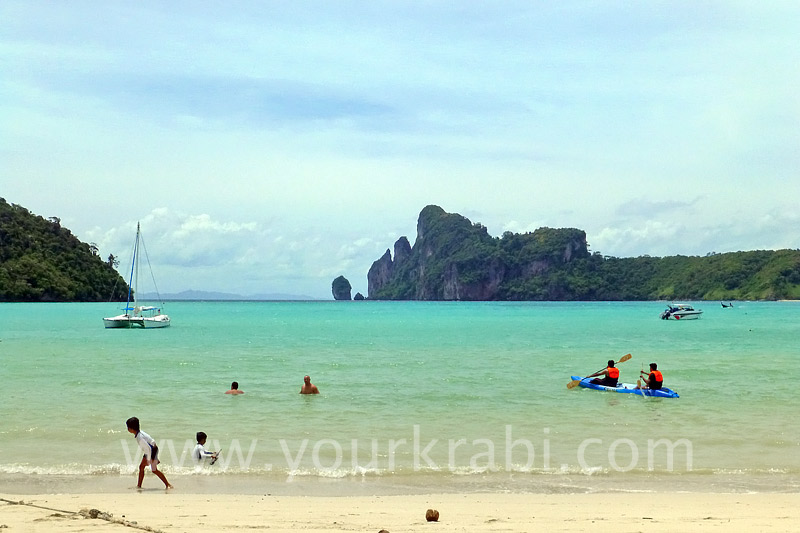 The other beach is on the side we arrived on – Tonsai Bay. This is picturesque, but does get all the boat traffic arriving and departing from the island. Do be sure to make it back to the boat at the appointed time. 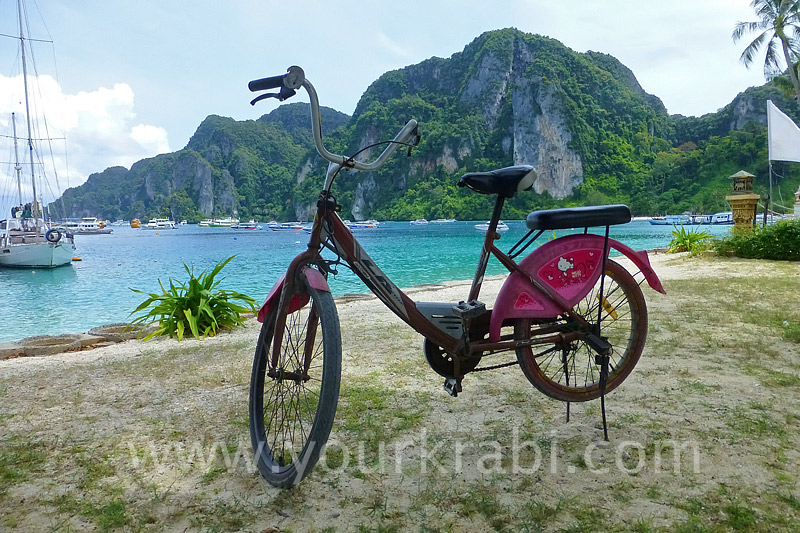 Once everyone returns from their post-lunch break, we head off to Hin Klang, an area of reef just off the cost of Phi Phi Don. It’s time for more snorkeling, though many people sit this one out – it’s more tiring than you think being out in the tropical sun all day! Hin Klang has been badly damaged by boats anchoring in the coral and the current is stronger than at Monkey Bay as it is more exposed, but it is still worth a swim around as you can occasionally find some areas teeming with marine life. 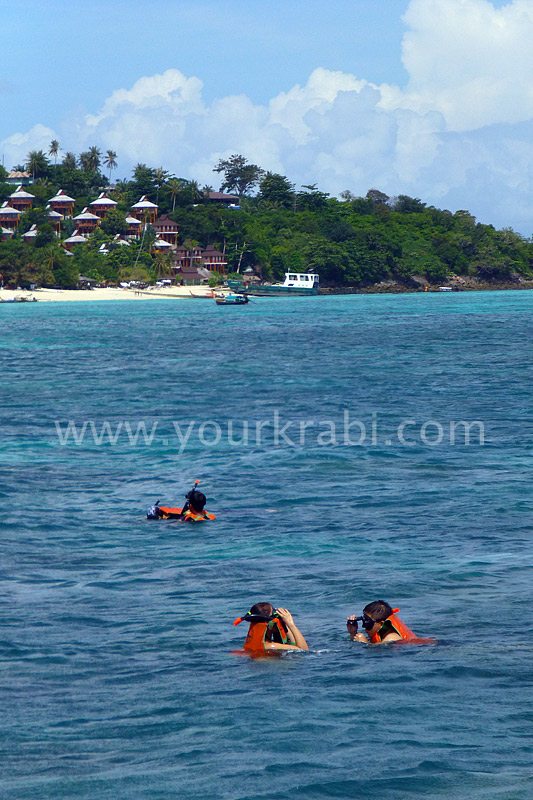 If you stay on the boat, you can enjoy nice views of both Phi Phi Islands, including the famous Long Beach. The guides also throw bread and fruit into the water to attract fish close to the boat (mainly sergeant majors) for passengers who don’t want to snorkel. 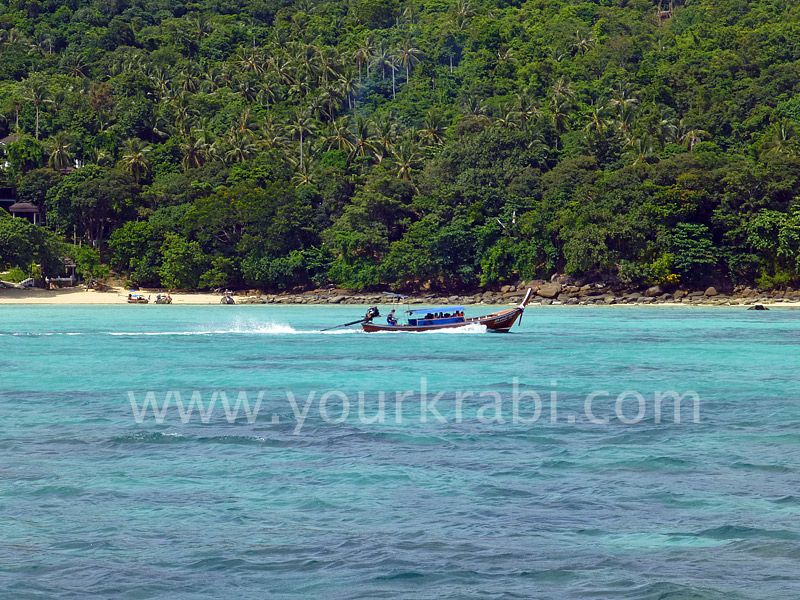 After the snorkeling, some fruit (watermelon and pineapple) is passed around on trays and then it’s time to head back to the mainland. As you can see it’s a pretty bumpy ride – this pic is of the boat in front of us. 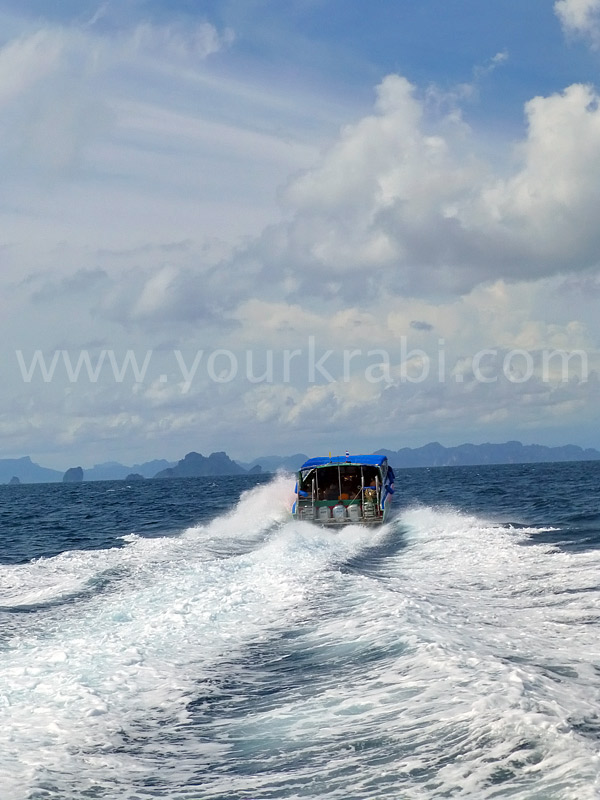 For the children, though, this is the best part of the day. They thoroughly enjoy banging up and down and hanging on for dear life as the wind whips away their screams and squeals at the front of the boat. 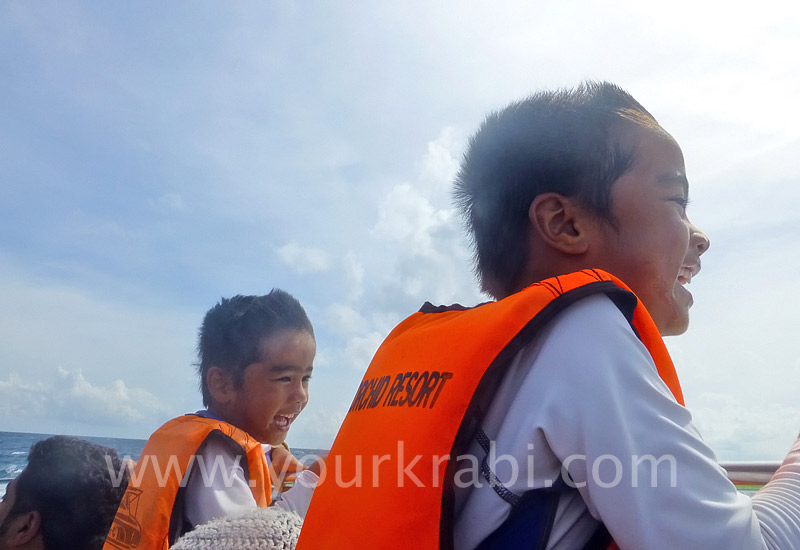 On the way back, we pass the “4 Islands” which is nice, although the sun is in the wrong direction for photos. Below is the “head” of Chicken Island seen as we speed past. 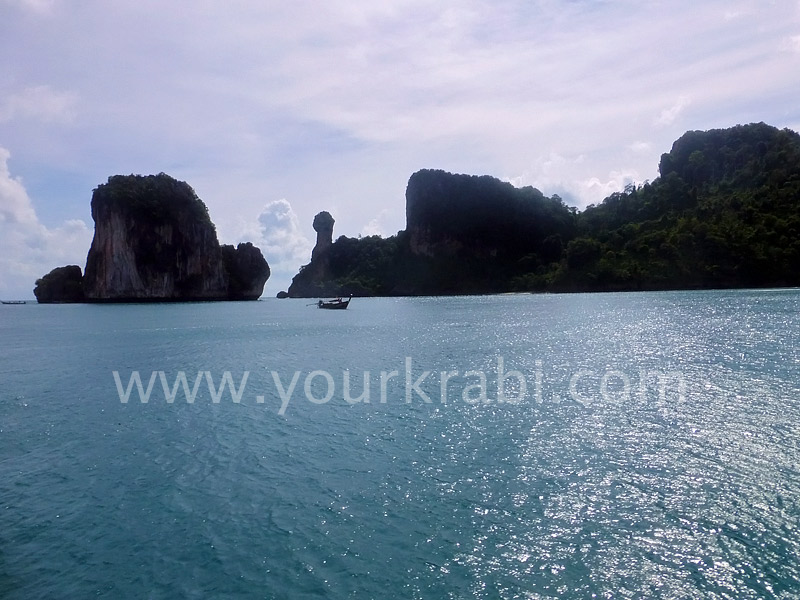 There are also nice views of the Railay peninsula as we head towards the mainland – note how difficult it is to keep a camera steady on a speedboat! 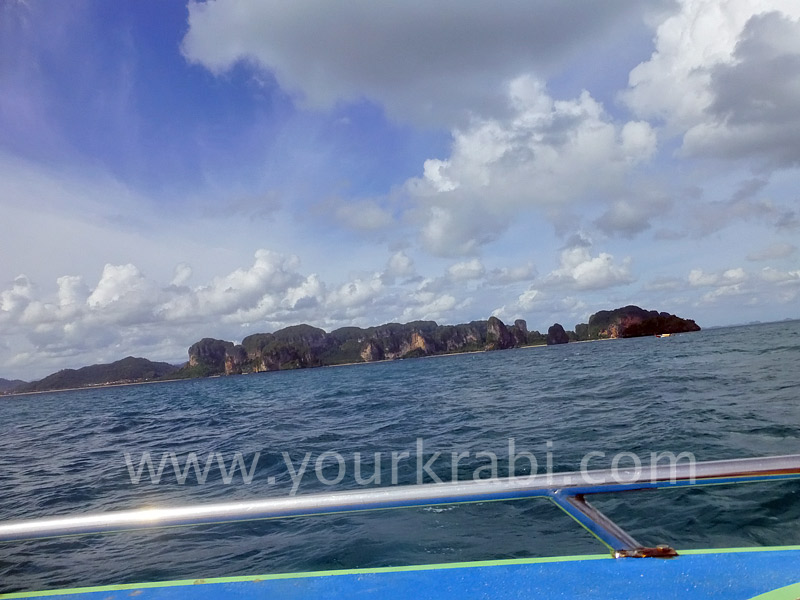 Finally the boat reduces speed and we cruise back to Ao Nang and Nopparat Thara pier, where the tour comes to an end. 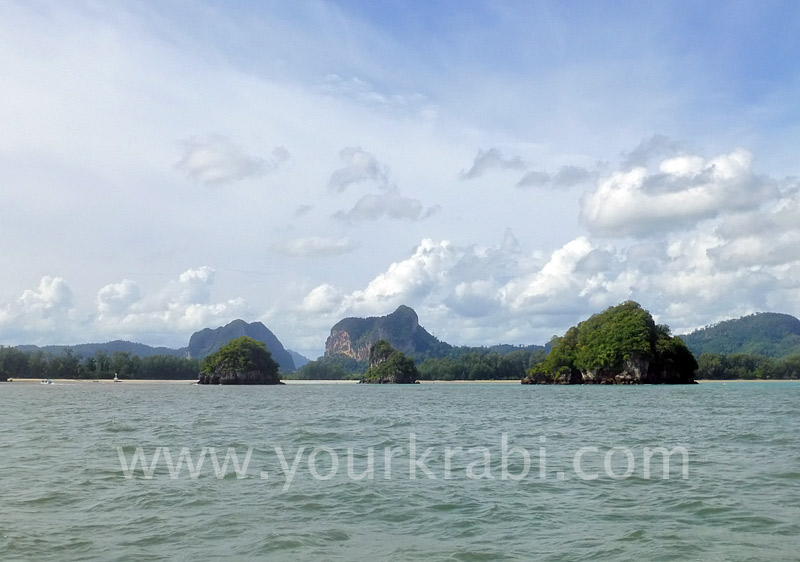 For more information about this tour and the guide price, see: Phi Phi Islands Tour by Speed Boat.