Beauty on the beach: a passer by does a double take

We are not the biggest fans of beauty contests here at Your Krabi. Judging women on their appearance – for all that pretence of “inner beauty” and “interesting personality” – seems fundamentally wrong-headed.

Of course it could be argued that women are routinely judged on their appearance whether they like it or not, and at least handing out tiaras to willing participants is a nicer way of doing it. Rightly or wrongly, though, the pageants continue to attract huge audiences worldwide and undoubtedly have an enduring appeal as celebrations of female beauty. 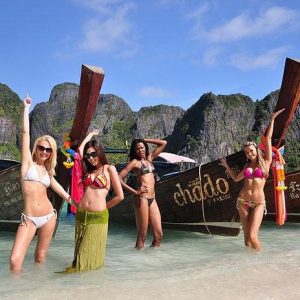 Contestants pose at “The Beach” on Phi Phi Island

Witness Miss Tourism World, whose 60 lovely contestants visited Krabi this week on a whirlwind tour of Thailand before the 2012 grand final in Bangkok. This purports to be a meaningful pageant, with the winner being a global ambassador for “tourism and beauty”.

Even without the cheesy poses, the “girls” certainly did attract attention at every place they went. You can watch the final and support your country’s representative on Thai TV Channel 7 at 11pm on 16 December.

Farida returned to Krabi a few months ago, after her Miss Universe Thailand win

In other beauty news, Miss Universe Thailand, who will represent the kingdom at the 2012 Miss Universe pageant to be held in Las Vegas next week, will also be representing her home town of Krabi!

Though her parents are not originally from this area, the Thai-Austrian 19 year old, Nutpimon Farida Waller, was born and raised here by her father Michael, attending Anubal Krabi and Ammartpanichnukul Schools in Krabi Town before going to continue her studies at Chulalongkorn University in Bangkok.

Farida’s family still lives in the area and she is spoken of fondly by those who know her. Her teachers describe her as a serious and bright student, who can speak 3 languages – English, German and Thai – fluently.

The 61st final of Miss Universe will be shown live on Thai TV’s Channel 7 on the morning of 20 December 2012, with an evening repeat. Go Farida!