Technically located in Phang Nga province to the north of Krabi, we include information about this trip (which can be done in a day from Krabi) as it is so popular – 007 and Bond Girl wannabes are clearly more common than we thought! Although The Man With The Golden Gun was released way back in 1974, you can still see plenty of people making like Roger Moore and Christopher Lee in front of the tiny rock of Khao Tapu, that served as Scaramanga’s hideout in the movie.

There is short trail around the island, which is worth exploring, There are a couple of small beaches, as well as incredible views from the look out points on the rocks. The entrance to Scaramanga’s lair in the movie was constructed in the passage of Khao Ping Gan, a massive slab of rock that broke off from and now leans against the cliff.

The crowds and rows of souvenir stands may tarnish the experience somewhat, but the trip is nonetheless interesting, especially if you consider the other things on the itinerary, not least the wonderful cruise through Phang Nga Bay, which has some of the most astonishing scenery in the world.

You will also visit the floating fishing village at Koh Panyi. There is a row of seafood restaurants seating hundreds, if not thousands, of tourists along the main pier where you will likely alight. After lunch, escape the endless souvenir stalls that have set up nearby (unless of course you really want to buy a shell wind-chime) and duck out towards the school and floating football pitch, directly behind. Here it is quieter and you can get a better sense of how the village lives outside of tour group hours. 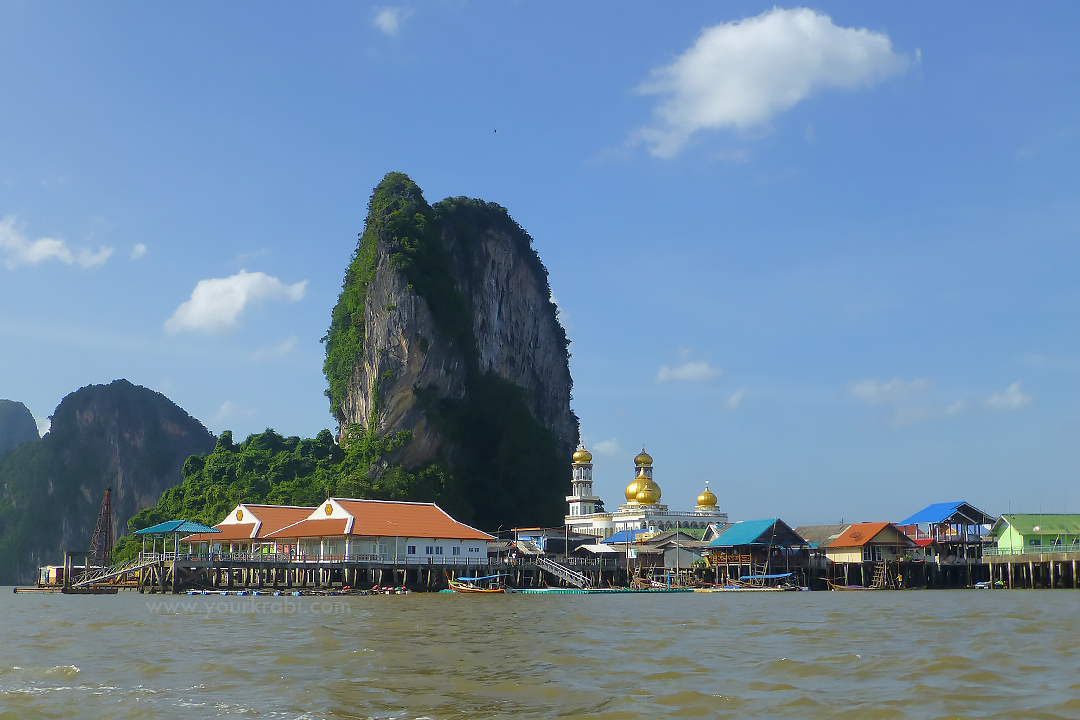 The tour – which should really be called a “Phang Nga” trip – can also be combined with other activities, such as a short kayak paddle through the mangroves.

Do note that it is a long drive from Krabi which, combined with picking up / dropping passengers off around various hotels on the group tours, can add up to a good 3 – 4 hours sitting in the minivan. There is no snorkelling or swimming available either as the water in the bay is rather murky – at low tide you will see exposed mud flats.

If you would like to take photographs beyond the usual selfies, we would highly recommend going it alone. Rent a car or take a taxi and go very early or late in the day to avoid the crowds – which come from both Krabi and Phuket – and charter a private longtail boat from the pier in Phang Nga. The boat + driver for the same itinerary costs 1500 baht for the 2 – 3 hour round trip; there is a 300 baht entry fee payable at James Bond itself (normally included on the group tours).

This is also a good side trip if travelling from Krabi to Phuket (or vice versa) as the pier is only a few kilometres from the main highway.

The itinerary for the organised James Bond Island tour, as well as the guide price, can be seen below. Contact a travel agent on site in Krabi for booking; they will also be able to sell add-ons such as elephant trekking or any other combinations they have on offer – though do note the caveats we list above.

Posted in Beaches & Islands, Cultural Experiences, What To Do In Krabi and tagged Travel Inspiration.