The lowdown: A fast and convenient way to see the best bits of the Hong archipelago, but expect crowds in high season.

The details: We took this tour unannounced on 14 March 2015 and all photos on this page are taken from this day / trip. You can click on the pictures to see bigger versions.

We were fortunate to have glorious weather: clear blue sky and glassy calm sea, though the temperature was already rising when we arrived at the beach at 8.30am. There was the usual crowd around the registration table, but the ladies were efficient at getting everyone sorted out with stickers and boat information. 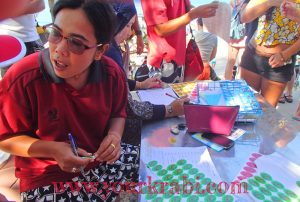 The speed boats were all lined up and ready to go – as were the customers! This operator serves all the major island destinations in Krabi, so they had several boats going out this day. Ours was a triple engine 45 seater boat, with 32 people on board. 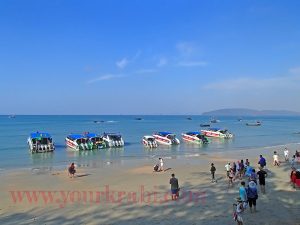 We managed to grab the front seats along with a family from Shanghai, and later couples from the UK and Canada. These are the best spots on the boat as you get a clear view of the scenery, though they are also the hottest, being in direct sunshine – so be sure to slap on the sun cream and a hat if you sit here. First stop was Centara Grand Krabi Beach Resort – our operator picks up guests directly from the pier here. Then it was on to Railay to pick up other guests, and finally we set off for the Hong Islands. 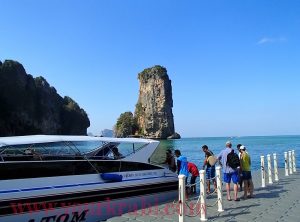 Along the way, our guide, Yip, a chatty and personable chap, pointed out the royal residence on the cape at Klong Muang, various rock formations and shared other tidbits of information, including his predilection for Chinese ladies. 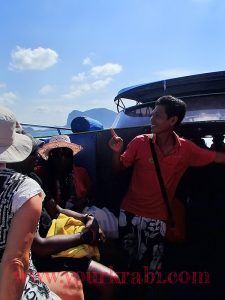 In a short time (20 minutes?) we arrived at our first stop, the islands of Koh Rai and Koh Pakbia. The crew first tried to stop at Koh Rai, pictured below, but decided against it (not clear why). 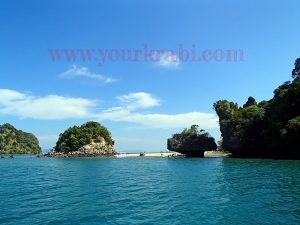 We then headed around the island to the next door rock known as Pakbia, with its sandbank stretching out into the sea. We stopped here for about half an hour. The beach was quite small and already fairly busy so there was not much to do here except take some photos. 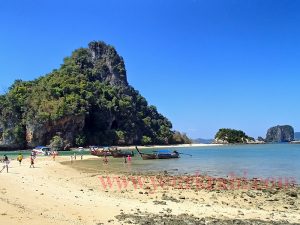 The kids had fun as – like almost everywhere on this trip – the water is clear, shallow and filled with little fish, which makes it an ideal tour for those with younger children who can’t yet snorkel. 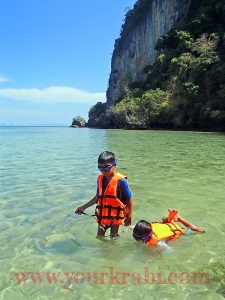 The next stop was Lahding island – less than 5 minutes away – and was frankly a bit of a disappointment. The beach was very crowded, and what used to be an excellent snorkeling spot was now murky and completely devoid of any marine life. Yip told us this was because of the tide at this time of year. He said the water was churned up with very low visibility and that at other times of the year there is still plenty to be seen. 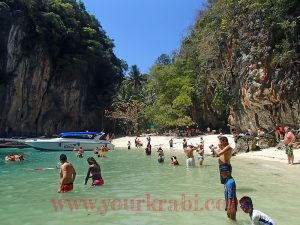 Our group amused themselves with a series of rope swings left behind by the birds’ nest collectors, who have recently vacated the caves towards the rear of the beach. They did look like fun. 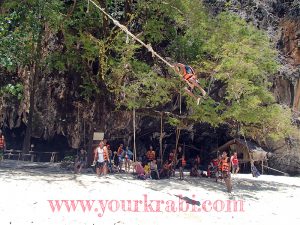 The cove itself was very beautiful, if you could imagine it without all the people. I still managed to grab some nice pictures that belie the reality. 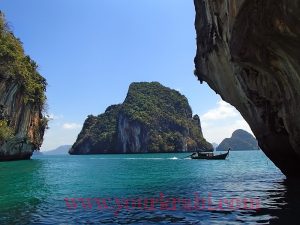 Our crew was busy meanwhile setting up a table for lunch; halfway through they changed their mind and decided to move on to Hong Island instead. 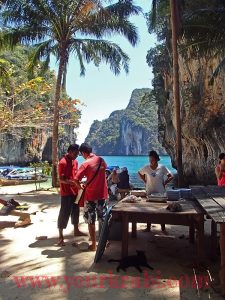 When we arrived at Koh Hong, the main stop on the tour, it was already packed with people. But, like Phi Phi, it is one of these special places that cannot be spoiled by crowds. The twin bays were magnificent and at the far ends it was actually fairly quiet. 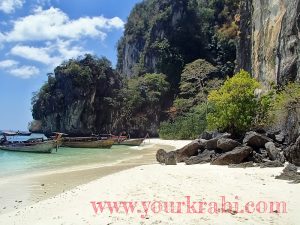 There was a short 500m nature trail into the interior of the island that almost no one was interested in and was filled with birds and butterflies. We looked out for the resident water monitor lizard but did not spot it; instead on our return to the beach we found this pretty green snake – harmless, according to the nearby rangers. 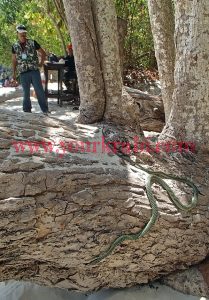 By this time, our crew had set up for lunch, which was excellent (or was I just very hungry?!) – jasmine rice with a rather spicy Thai green curry, stir fried vegetables and fried chicken drumsticks. It was served buffet style, except for the chicken which was limited to one piece per person. Plenty of fruit to follow. We then had another hour to relax on the beach, watch people coming and going kayaking and splash in the clear water. 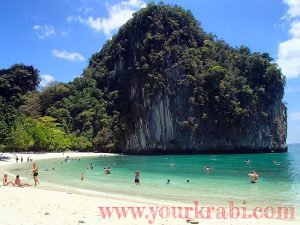 Finally (too soon, it seemed) it was time to go. We got back on the speed boat and headed past the magnificent backdrop of Phang Nga Bay to the rear of the island. 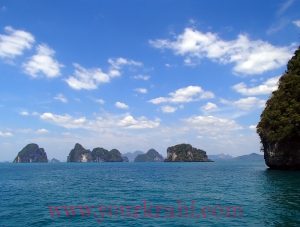 After another couple of minutes we reached the lagoon, a collapsed cavern with a “secret” narrow entrance passage between the cliffs. Boats can come in here until the water is knee deep – any lower than that, only kayaks can pass. The water is a limpid green and our boat does a cruise around and then stops for photos, which Yip our guide obligingly takes. 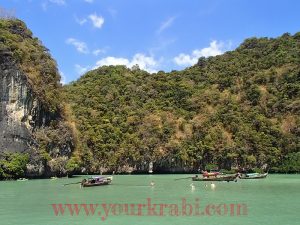 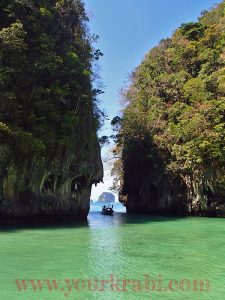 We exit the same way we came in, then head back to the mainland. The trip was shorter than expected (we reach back around 15.30, instead of the advertised 16.00), and no stop at Koh Daeng, which means we didn’t really get to do any snorkeling. Yip explains again that this is an issue with the spring (neap) tides which carry a lot of sediment into the water so is not representative of the usual tour at other times.

All in all, it has been a good day, with Hong Island itself being the highlight. The speed boat was comfortable and means minimal travel time, but perhaps more time could have been spent on the beaches to compensate for the lack of snorkeling on that day.