In an ideal world elephant trekking would not exist. But, with elephants fast disappearing from the wild in Thailand, and “sanctuaries” charging often astronomical prices, one of the most easily accessible places to see these fascinating animals up close – and support their upkeep – remains in a trekking camp.

Elephants are incredible creatures, both a symbol of the nation and a talisman for the Thai people. With their wrinkly grey skin and swaying trunk, they are a fascinating combination of colossal brute force, gentleness and remarkable intelligence and agility that inspires both respect and affection. They have been kept in captivity for at least 4000 years, although they remain wild at heart.

When logging was outlawed in 1989, around 4000 of Thailand’s working elephants became unemployed overnight. At the same time, it was not possible to release these animals back into the forest – they had after all been engaged to destroy their own habitat. The immediate solution for many mahouts was to take to the streets of Bangkok, begging for food. Elephants are very costly to feed, each one consuming 200-300kg of food per day. But then the growth of tourism offered an easier option for both man and beast.

Taking tourists on rides means elephants are able to provide income for their owners, while living as freely and naturally as is possible in captivity. There are only a few elephant camps in Krabi – such establishments must in theory follow strict guidelines as set by the National Livestock Department regarding the provision of adequate food, water and shade for their animals, as well as proper health care.

Trekking tours – usually 30 – 45 mins ride on the elephant, optionally combined with another sightseeing activity – are bookable through any local agent. If you don’t wish to ride or do a tour, you can also visit most camps directly just to observe and photograph the elephants: in this case you would normally be expected to purchase some food for them – usually bananas or pineapples. This will also give you an opportunity to interact with and hand feed the ever-hungry pachyderms, at least for a few minutes.

There is currently one, very recently opened elephant “sanctuary” in Krabi that offers half day, non-riding experiences with the retired animals it takes in; this is located in Ao Luk district, but will pick up from Ao Nang and other beach areas north of Krabi Town. More established sanctuaries are located close by in Phuket, or the highly recommended Elephant Hills in Khao Sok, but the main ethical elephant industry (oxymoron intended) is concentrated in the north around Chiang Mai. There is also a working elephant village, called Elephantstay near Bangkok, that takes “volontourists” for a day or longer – interestingly, they ride their animals, saying there is no reason not to.

If you are hesitant to try elephant trekking because of what you have read online, we encourage you to read the below with an open mind. Elephants are truly amazing creatures: children in particular love the unforgettable experience of riding them, and it would be a shame to miss out – or shell out thousands more baht for a sanctuary – due to being misinformed. 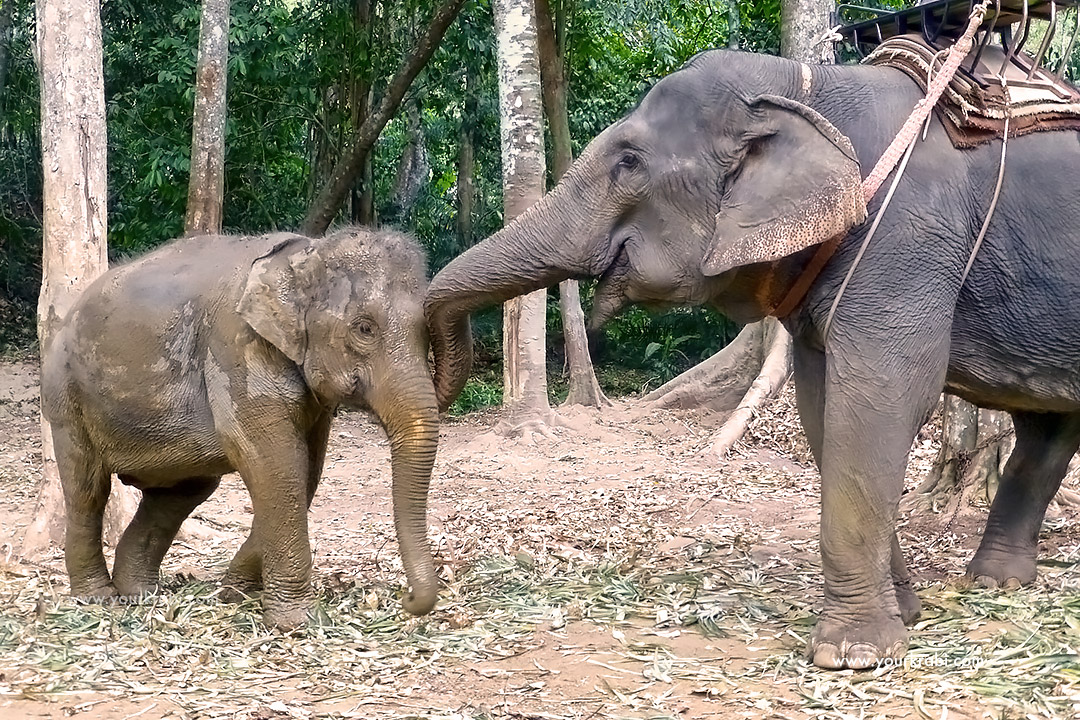 This is a typical elephant camp: the animals live without walls, close to food and water, with a long chain attached to one ankle. Babies are kept with their mothers.

There is a lot of talk on Trip Advisor and social media about mistreatment of elephants in Thailand and animal cruelty. This is unfortunately true in some camps in Krabi and elsewhere in Thailand, particularly with inexperienced owners and mahouts – see our own documented cases below. Note: we’ve visited all the camps in Krabi regularly, over a period of more than 15 years. You will occasionally see elephants with wounds, or purple marks on their heads where ointment has been applied after a jab with the hook has pierced their skin – either by accident or through deliberate force: if overworked, the elephants will resist. So this is a pretty sure sign of mistreatment.

A minority of elephants have signs of abuse, like these head wounds

But while the grounds for such criticism are valid, the scale and scope of the mistreatment have been exaggerated by the propaganda machines of many sanctuaries and animal rights groups, often in order to justify their high fees or collect more donations. Indeed what even constitutes “mistreatment” has become so broad as to become almost meaningless, relying on appeals to emotion, pseudo-science and no small dose of anthropomorphism – instead of referencing established methods of handling elephants in captivity.

For example, it is often the case that standard practices such as chaining elephants loosely by one leg to stop them wandering off – they are never kept in enclosures – or merely carrying a takaw (bullhook) to direct or control them in emergencies (we are not condoning unnecessary use) are cited as examples of “mistreatment”.

In addition, the “facts” circulating on blogs and social media about elephants’ alleged risk of spinal injury from carrying tourists and the way they should be managed in captivity have been discredited by several experts in elephant welfare, such as Dan Koehl of the International Elephant Foundation.

Neither are baby elephants routinely dragged out of the jungle and “broken” for trekking camps: the fact is that the vast majority of baby elephants in captivity in Thailand were born in captivity, to working mothers, and are kept with them at all times. The now infamous “phajaan” clip was apparently a staged event, sponsored by an animal rights group in 2002, to highlight the indisputably cruel wild elephant trade. The intervening years have seen the introduction of a national register of captive elephants with IDs and “passports” to verify their origin and curtail illegal trafficking. 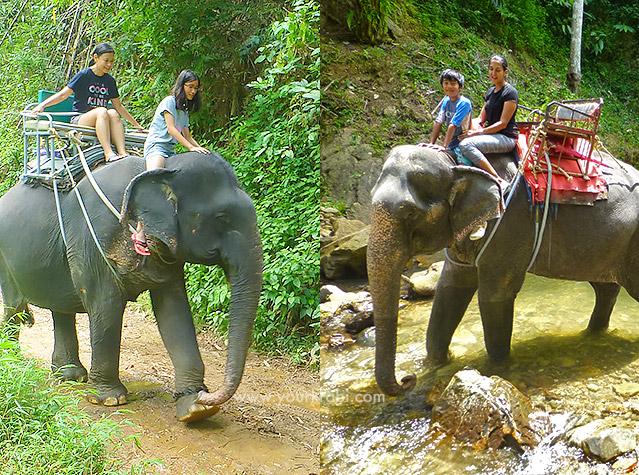 Riding on the head is more comfortable for all concerned.

The details of all these issues are too lengthy to go into here, but those who are interested in looking behind the wall of moral outrage can visit the excellent and informative website: http://www.nakaelephantfoundation.org/the-threats-1#captive-elephants or Google “Dan Koehl”, for a critique of the claims made by elephant sanctuaries.

The bottom line is that all camps everywhere have an interest in the wellbeing of their elephants, even if purely financial, so serious and long-term mistreatment would be counter-productive: worth $30,000+, a healthy elephant is just too valuable to abuse. Of course, there is plenty of room for improvement too: here is where education, social and cultural pressure (elephants are revered by Thai people) and legislation can all play a part in improving their welfare.

These are the main reasons we continue to recommend elephant trekking as an activity, together with the very real big picture view of where these elephants and their mahouts would end up without this valuable income providing for their upkeep. Habitat loss, not bullhook use, is actually the most serious issue facing Thai elephants this century, with barely enough place to support the dwindling wild population, let alone the possibility of releasing any captive animals back into the forests.

So trekking currently remains the “least worst” option for the thousands of captive Thai elephants not in sanctuaries, and we feel that operators should be supported and educated, not vilified and boycotted. The very survival of these elephants we all love depends on it.

Posted in Animal Attractions, What To Do In Krabi.