This is a trip report from our unannounced visit to the elephant camp near Huay Tho waterfall, which runs 3 different programs:

All pictures here were taken on that day (August 2014). 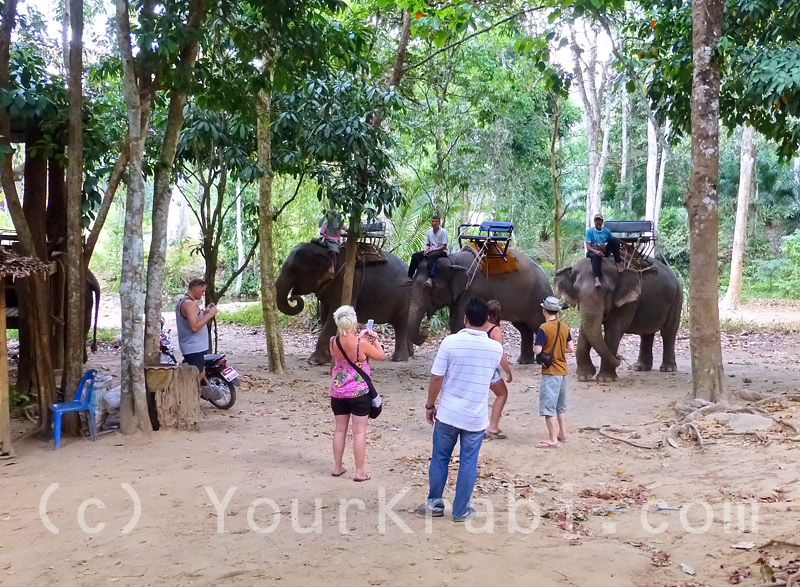 As all programs include the common element of elephant trekking, let’s take a look at that first. I count six adult elephants in the camp, which is situated in the borders of the Khao Phanom Bencha National Park, near the entrance to the park HQ. All are female, and there is also one baby elephant. The all-girl group get along well without the presence of a more aggressive male and, as they are ridden a maximum of 4 times a day (compared with double this in most other camps), they are relaxed and well-tempered. 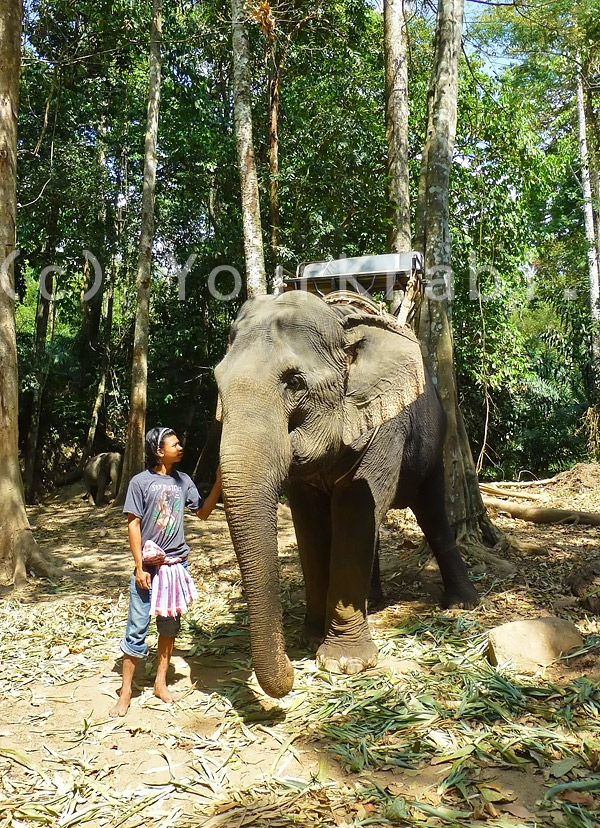 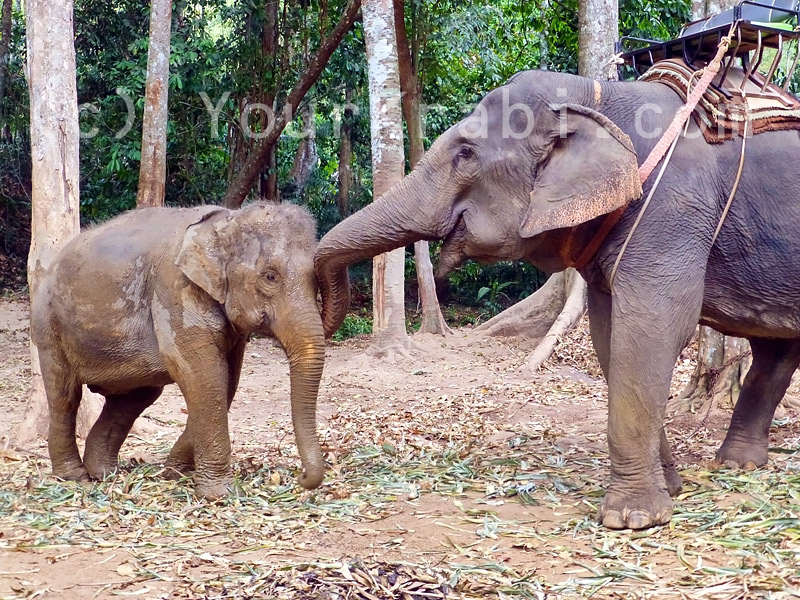 You can immediately see how well an elephant is treated by checking for purple marks on its head and body. Each of these represents a small wound or bruise inflicted by the mahout, using the sharp hook they carry (usually the back, blunt end). These are then treated with anti-bacterial spray containing gentian violet – which leaves the purple marks. The elephants at this camp have not a single mark on them. Their frequent breaks mean they have time to eat (elephants must consume between 200 -300 kg of food a day) so they are not malnourished, and have bright eyes, frequently flapping ears and tails and fleshy pink mouths (the opposite means the animal is either overworked, stressed or malnourished – often all three).

They are kept right next to their water supply, with lots of shade – important in the heat.
The mahouts seem like a happy bunch too, both young and old men, sitting and chatting together in their wooden hut nearby when we arrive.

At a large wooden pavilion at the entrance, you can read about the work of the Asian Elephant Foundation of Thailand.

To mount an elephant, you need to climb up to a platform where you can hop over to the chair on its back. The elephant is trained to stand still while you mount. There are seven steps in all to reach the top – easy enough for people who don’t have mobility issues.

The trek itself goes through the forest, and along a stream. It’s definitely an undulating ride as the elephant expertly negotiates stepping stones, ditches and narrow passages through the trees – so you need to hold on, but at no point do you feel unsafe. It’s possible to take pictures from your high viewpoint and there are some nice scenic shots to take, especially in the afternoon light. 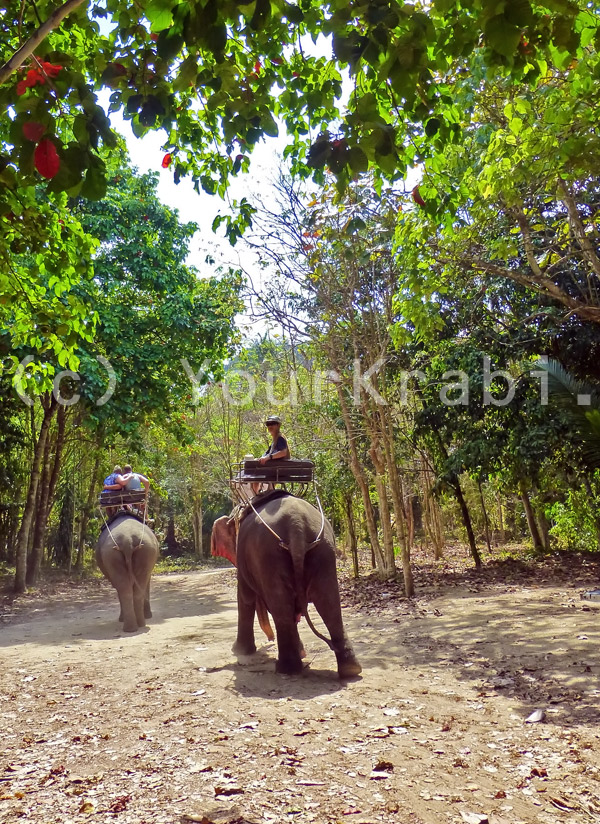 Following the trek, the elephants like to hang around for their favourite treat – bananas. The baskets of fruit are sold, but as they are generating income for the local villagers who provide them, it seems fair (this area sees little of the tourist money that the villages near the beach do). It’s fun to feed the animals – and amazing how dexterous they are, plucking the small bananas one at a time from your hand with the end of their trunk. 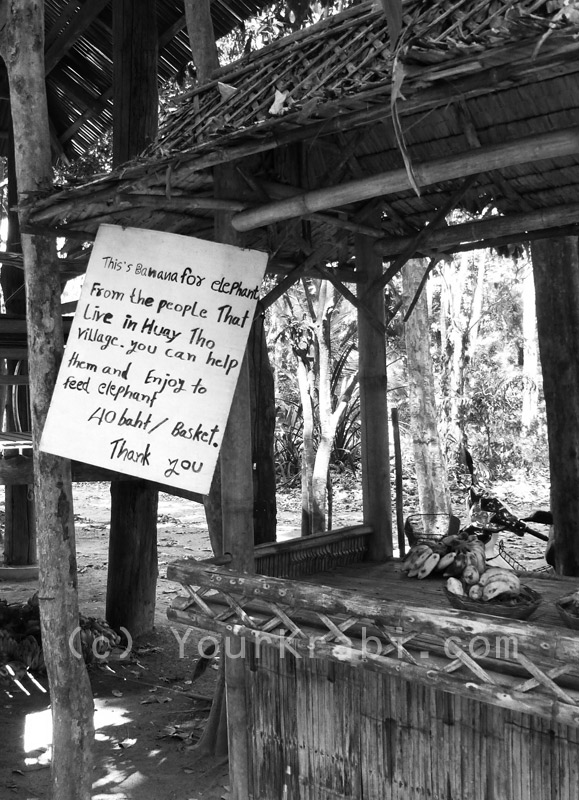 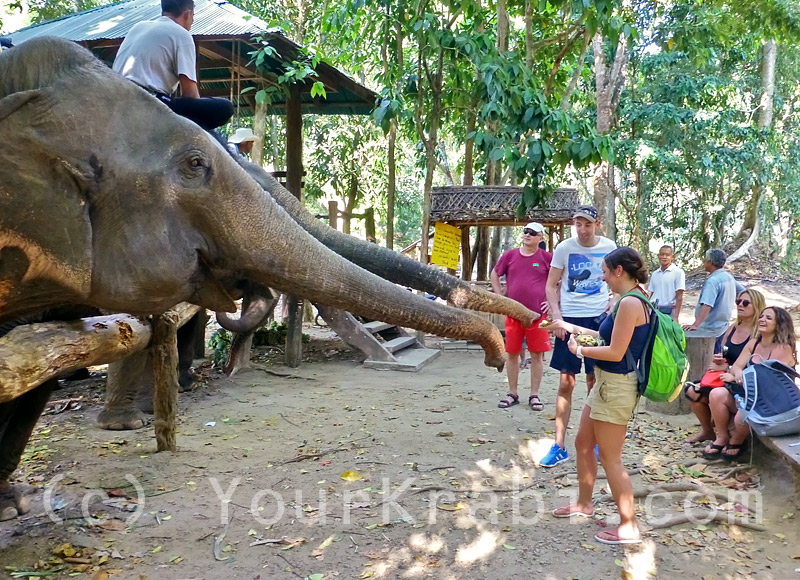 Then it’s on to either bathing the animals or to the nearby waterfall in the National Park, depending on which program you booked. The waterfall is a short drive away and is reached by a short trek – less than 1.5km from the car park. The water is cool and refreshing year round. You can choose to stay near the bottom, or climb up to the higher levels, which offer more of a rush. You’ll have about an hour to stay here and explore – there’s also a another trek into the forest over on the other side of the park entrance, as well as a small cafe where you can grab a snack and a drink if needed. The guides normally stay in one place (rather than actually walking with you) but they were happy to answer questions about the park and various trees – though English was limited. 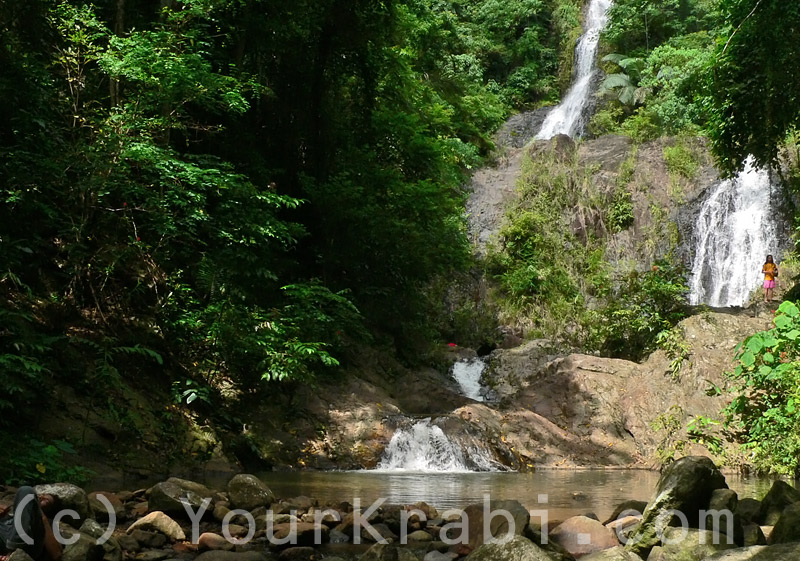 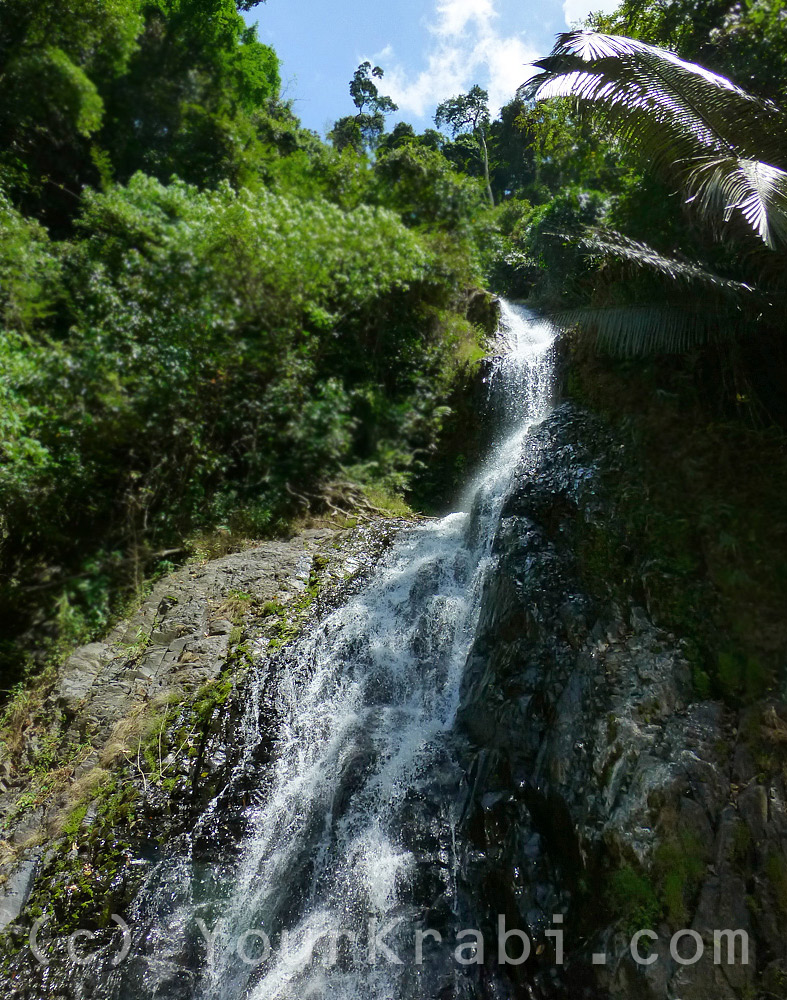 Having been to the waterfall many times before, we left early and went back to the camp to check out the bathing (with our own transport – it would not be possible to do this on the tour). Elephant bathtime was still in full swing when we arrived. The elephants were in a shallow pool in the river, which had been dammed for this purpose. We were able to go into the water and even the children, who were hesitant at first, became confident as the mahout showed them how they could scrub the elephant’s skin. He even lifted them onto its back and they were rewarded with a trunk-power shower. The elephants were remarkably gentle and clearly enjoyed this part of their day – almost as much as we did. It was all over too soon. 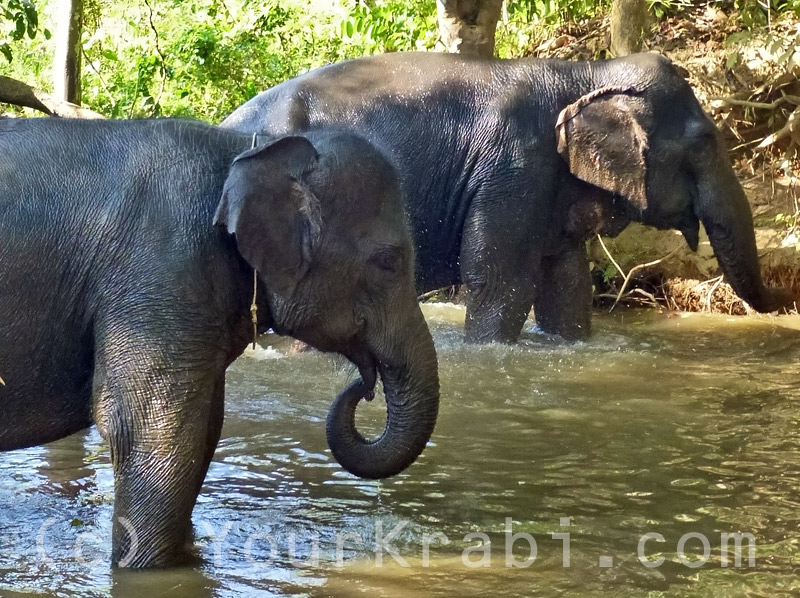 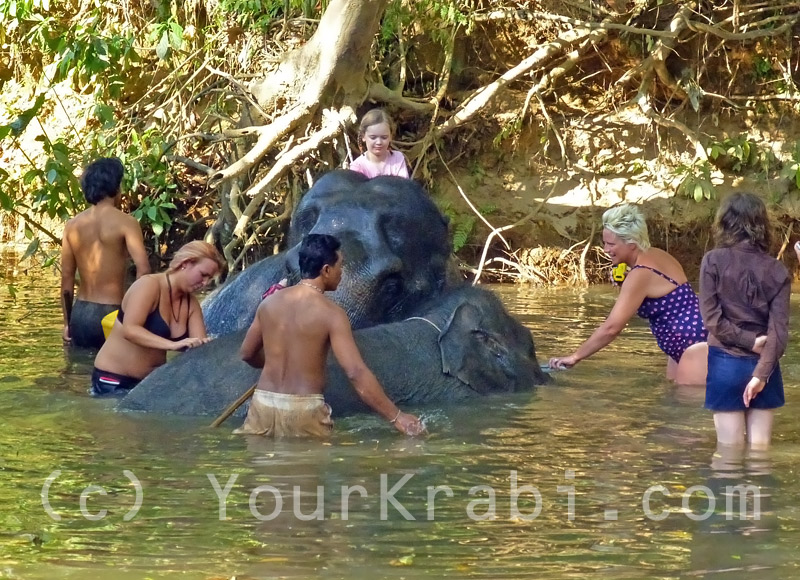 The ride back to Ao Nang and the surrounding area is quite long (40 mins), but also quite scenic – this area is very rural and has not been touched by tourism and the rampant development seen in other parts of Krabi. You’ll pass by traditional villages and plantations as well as some beautiful landscapes – have your camera ready.