NOTE We no longer recommend this tour, as we’ve had lots of reports of cost-cutting. In particular, the island sunset barbecue has been replaced by an inferior experience – eating a buffet meal at a restaurant with no view in Railay and a fire show in the car park, which (in our opinion) adds no significant value to the standard 4 Islands Tour. It is possible that some operators still offer the proper “sunset on the islands” experience – we advise checking carefully before you book.

The lowdown: This is a great trip for those looking for a bit more adventure than can be found on the normal island tours: it involves plenty of activities, including swimming through a cave, cliff jumping and swimming with phosphorescent plankton – there’s not that much beach time.

The details: We took this tour on 12 December 2014 and all photos on this page are taken from this day / trip.

Overall, this tour seemed well run. The registration process was organised: although there was the usual warning about payment if snorkels / masks are lost, each set was numbered so they couldn’t be misplaced. The equipment was new and clean. 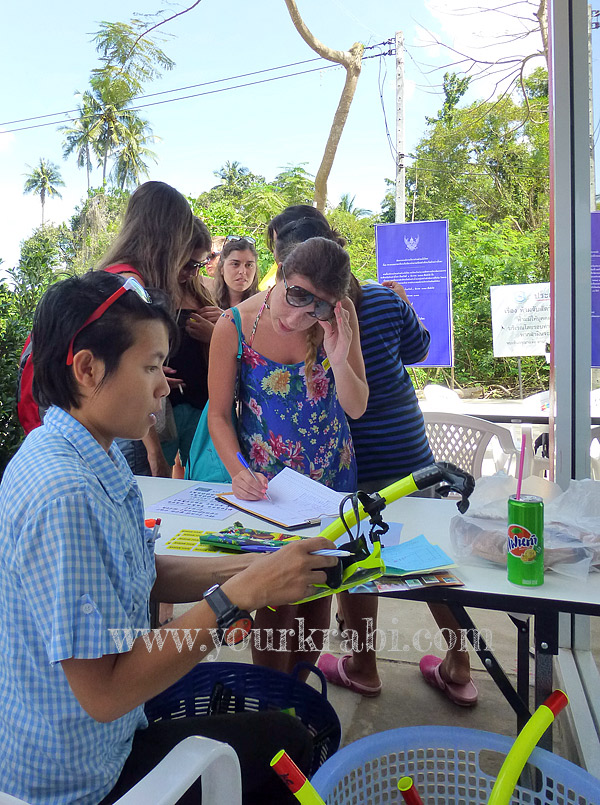 We depart on time (1pm) from Ao Nam Mao pier. The boat is bigger than expected with plenty of room inside and also out front and back on deck. There are 26 people in all, including us, on the 35 seater boat – not bad for high season. 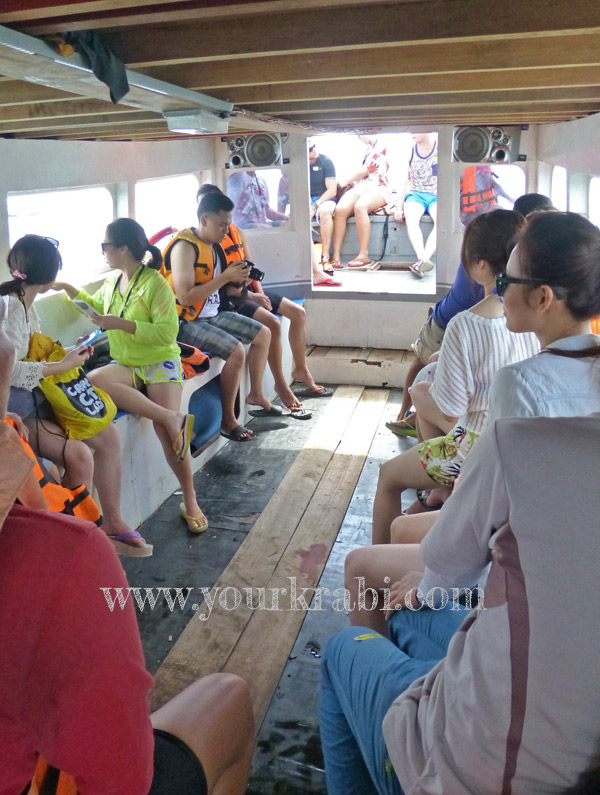 We have a female guide, which is unusual, and she is great, putting everyone at ease right from the start. Normally the boat would make a stop in Railay to pick up passengers, but today there are none here, so we head straight to Phra Nang Cave Beach. The boat first moors off shore for those who wish to swim to land via the big cave (daylight is visible at all times) – as we have small children we elect to stay on the boat which will continue on to the beach. 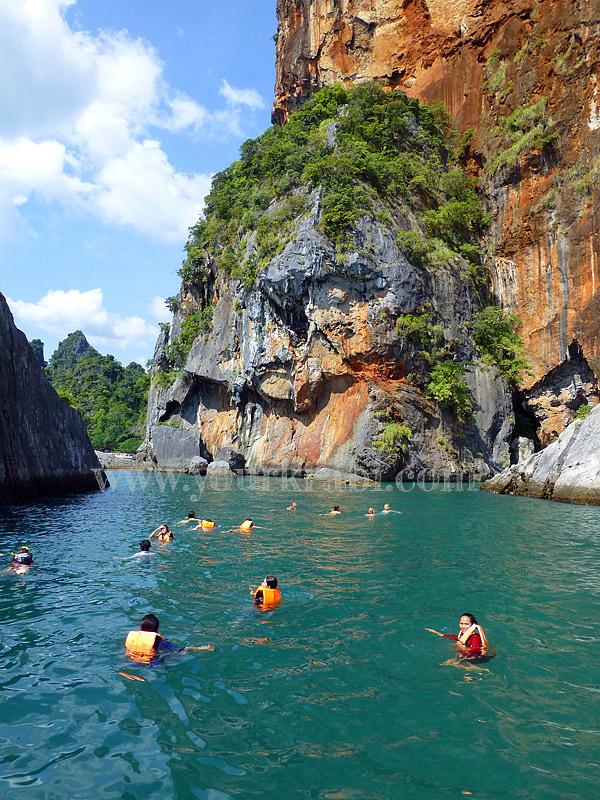 We arrive at high tide so there’s only a thin strip of sand visible and this is absolutely mobbed with people and day trip boats. There’s barely a place to sit down, but we can swim in the designated area. It’s a shame as Phra Nang Beach is actually very beautiful when a bit less crowded. 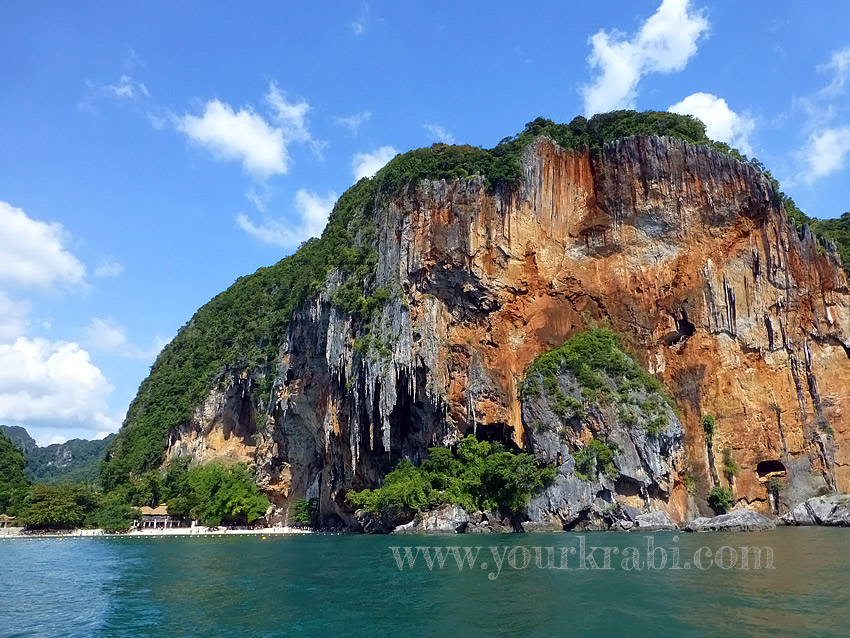 After about half an hour here, we get back on the boat and head out to the islands! 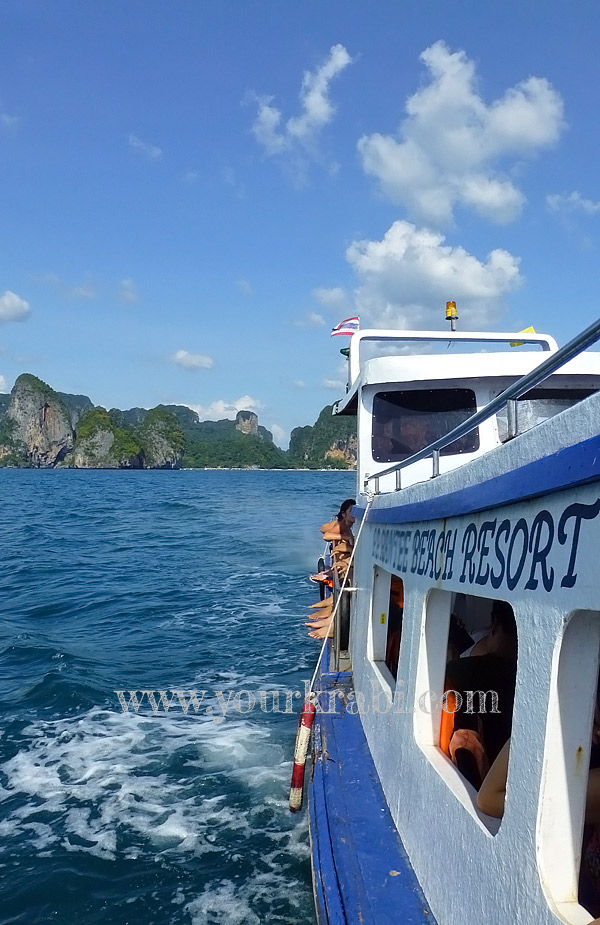 First stop is Koh Tan Ming, the famous rock just off Poda Island. It’s in shadow so in theory there should be plenty of fish to spot while snorkeling – but the reality is that there are not many around. People amuse themselves swimming, or taking dives off the roof of the boat. 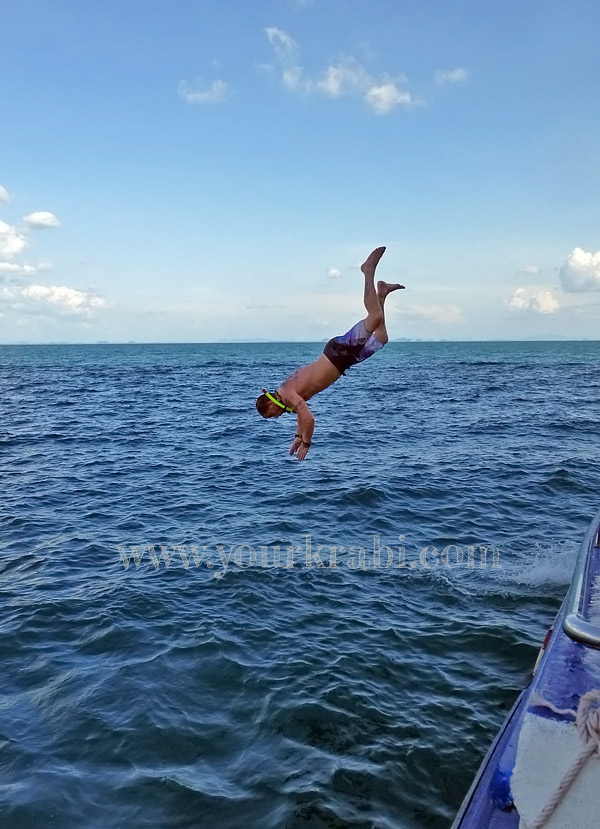 After depositing the food and the catering staff at Poda Island to set up the BBQ, the boat heads around the island past some incredible sheer cliff faces and rock overhangs – a very dramatic landscape. We stop around the corner, near the cliffs. 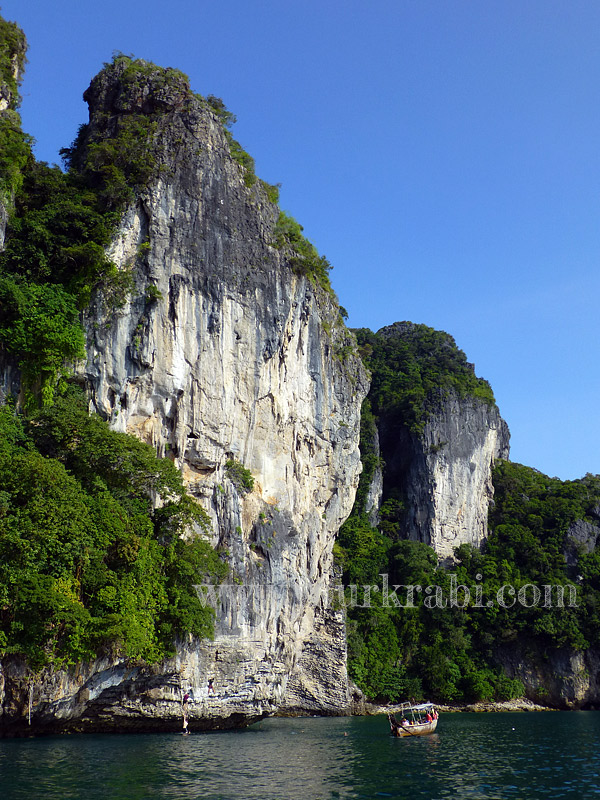 There are several spots for climbing around here. The more serious “deep water solo” tours go a little further down and carry proper climbing equipment on board. Our spot is more for fun and has (relatively) easy ledges like steps you can climb to jump off. You can go as low, or high as you like – or simply stay on board to cheer and do countdowns for those brave enough to try it out. (Note: as of 2016, it is no longer permitted to “cliff jump” or deep water solo here, or anywhere within the National Park, so this activity is no longer available). 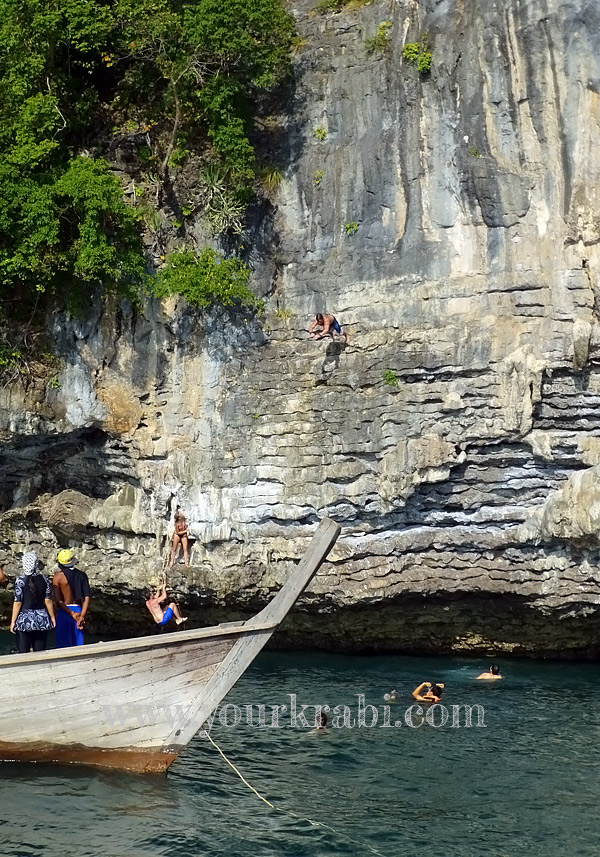 When everyone has had their fill of adrenalin, we head further around the coastline – it’s mid-afternoon and the light is very beautiful. 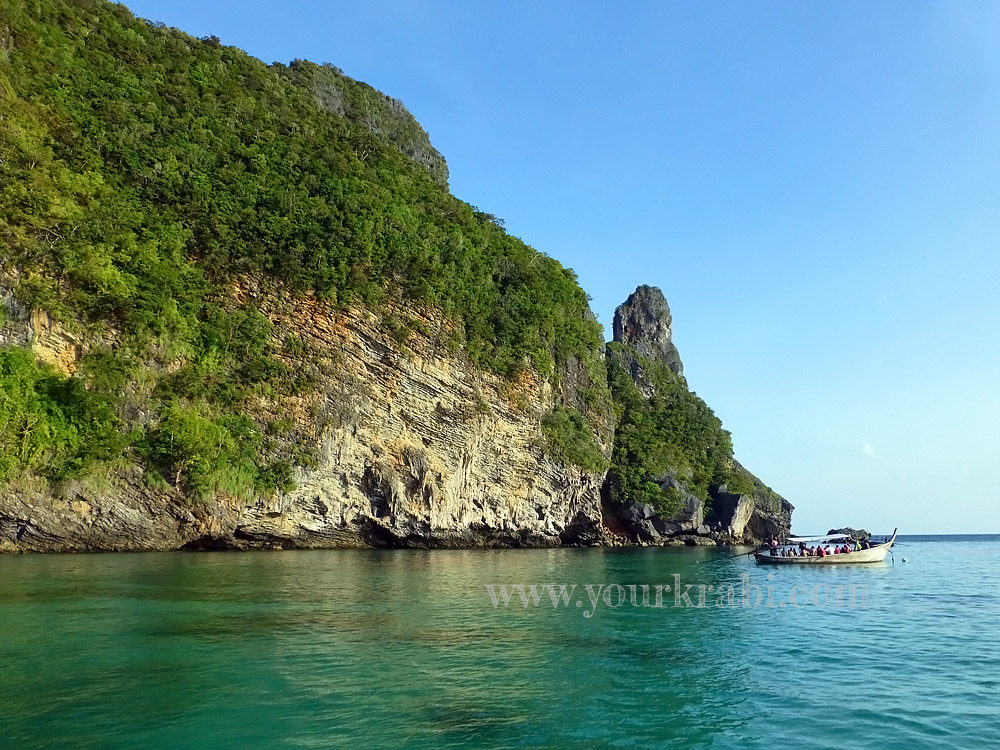 We stop for more snorkeling around the back of Chicken Island – the water is incredible, but again not that many fish to be seen. The guide says if it were low tide they would have visted Koh Talu, a rock island nearby, which is better for snorkeling. 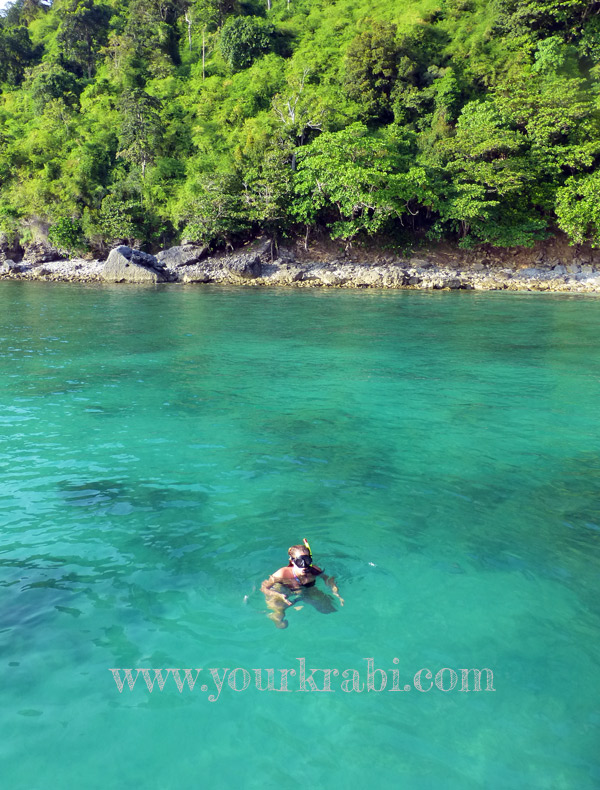 Next we head slowly around the “head” of the chicken for some classic photo ops: 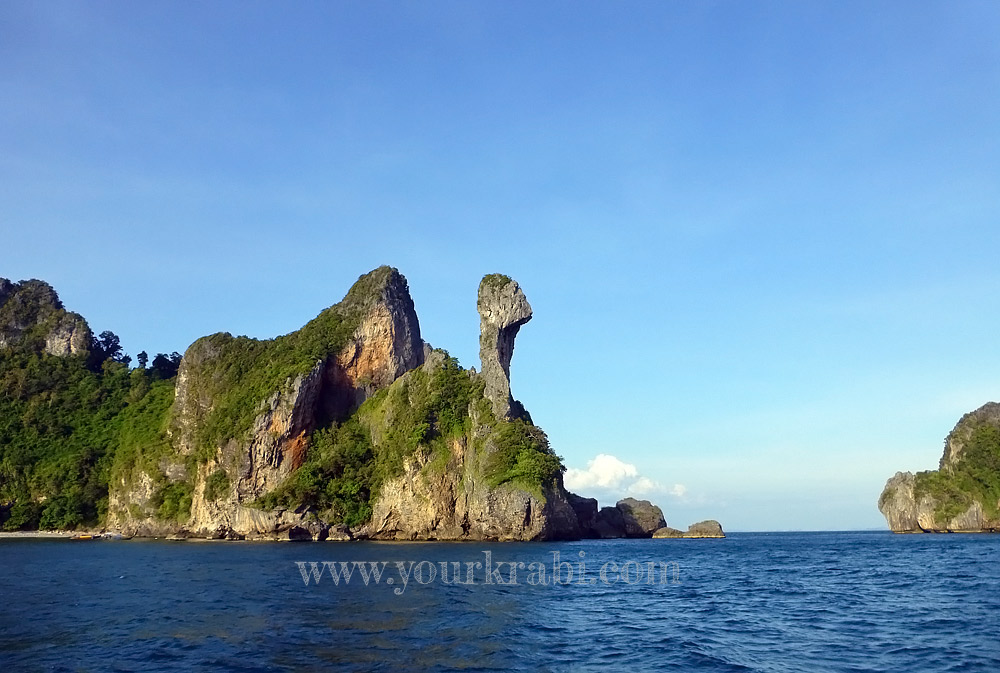 At around 4.30pm we take our second beach stop, at the “thaleh waek” (Thai for “split sea”) sandbanks, which unfortunately are only slightly visible at high tide. There’s a Bollywood movie being filmed, which is fun to watch while the kids splash around in the clear shallow water. 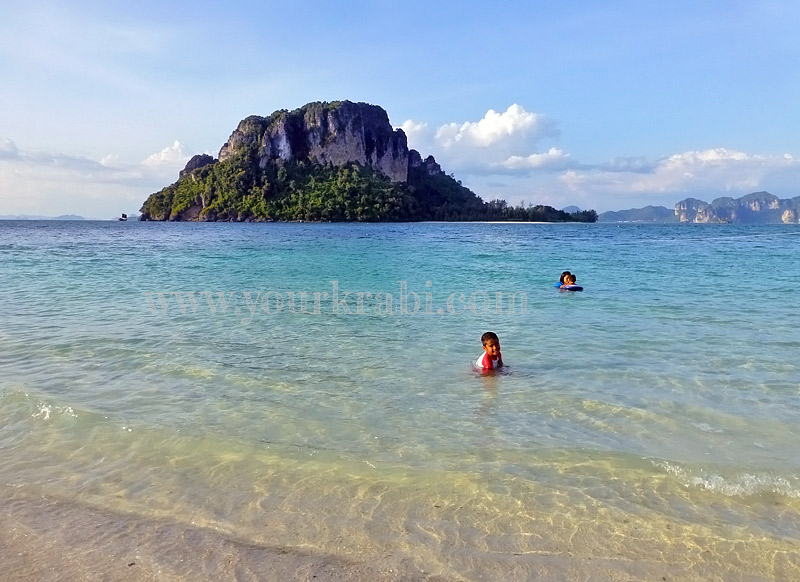 The boat used for the tour is a good size – more stable and comfortable than a traditional longtail, but not too big so it can still park up on the beaches. 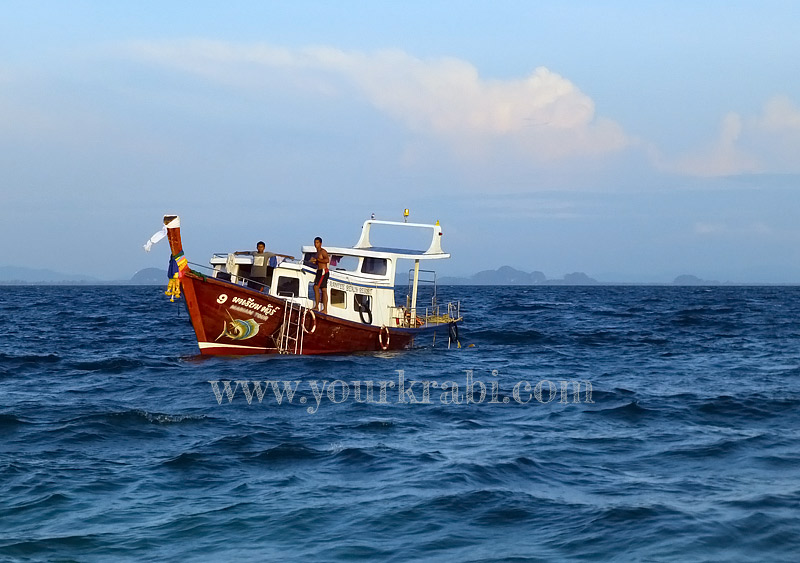 As we head towards Poda, the sun begins to sink over the island-dotted horizon. 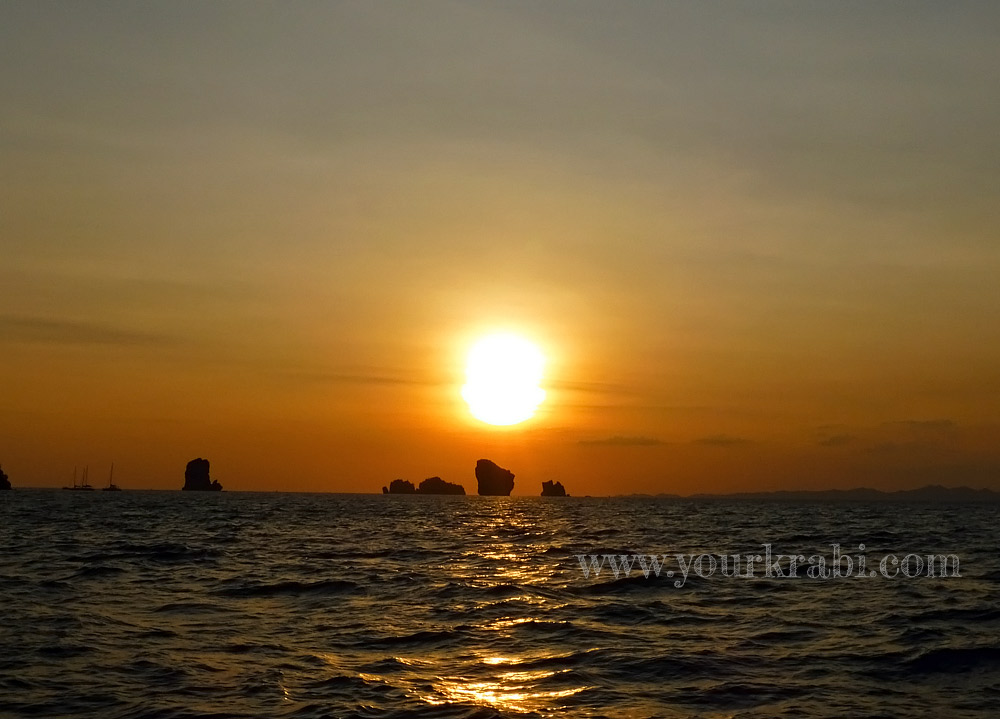 Everyone is starving when we arrive; a good tip is to eat an early lunch or late breakfast before you depart as nothing is provided in the way of food until 5.30pm (water is plentiful however). 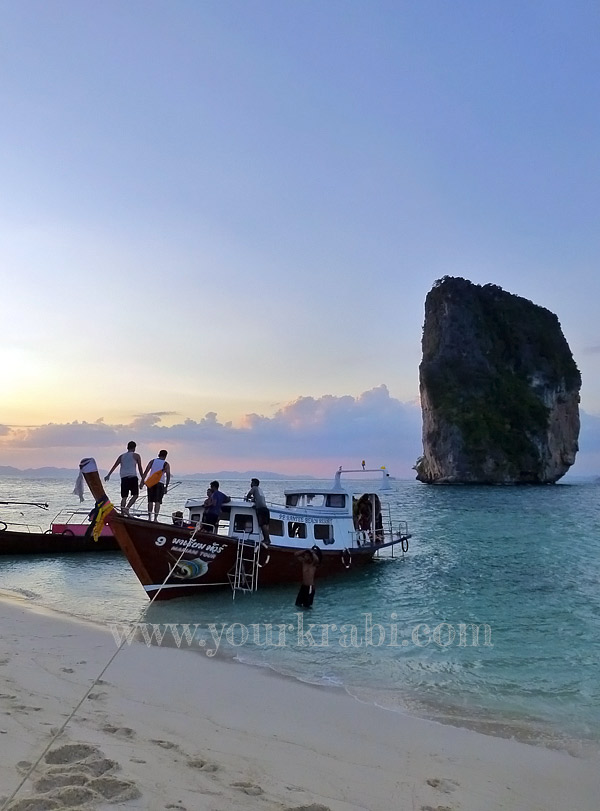 We head over to our group’s table, which is already set up with the food. There are two dishes – a very mildly spicy Thai green curry, and some stir fried vegetables. There’s also fried chicken (limited supply) and BBQ skewers of chicken sausages and veggies. There’s also plenty of rice and fruit, and a sweet chilli dip for those who prefer things a bit more spicy. 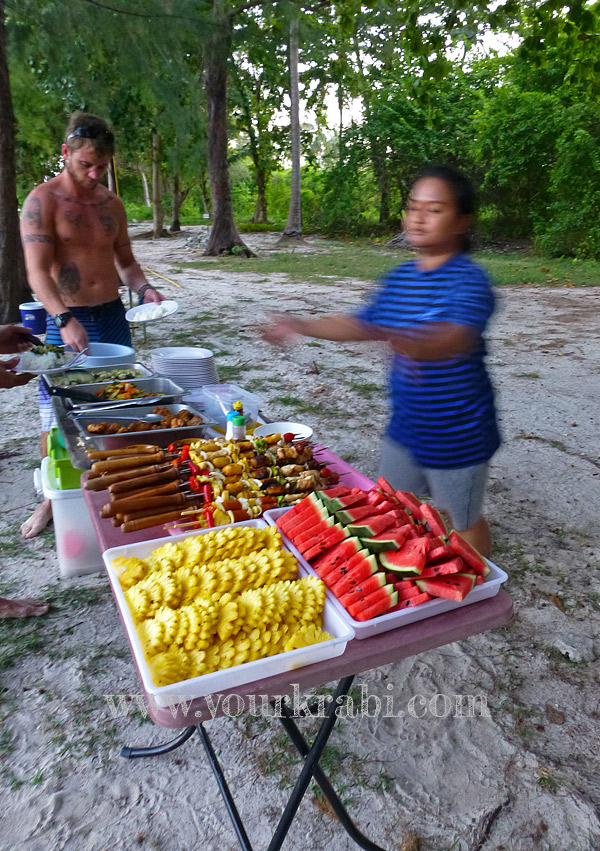 You eat picnic style on the beach – there are a few other boats there (also doing sunset trips) but nothing like the crowds in the daytime. It’s quiet and peaceful, with most people just chilling out and watching the sunset.

There is beer for sale at the National Park hut and some people buy a few before settling down to watch the boat crew do a fire dancing show – they are multi-talented! 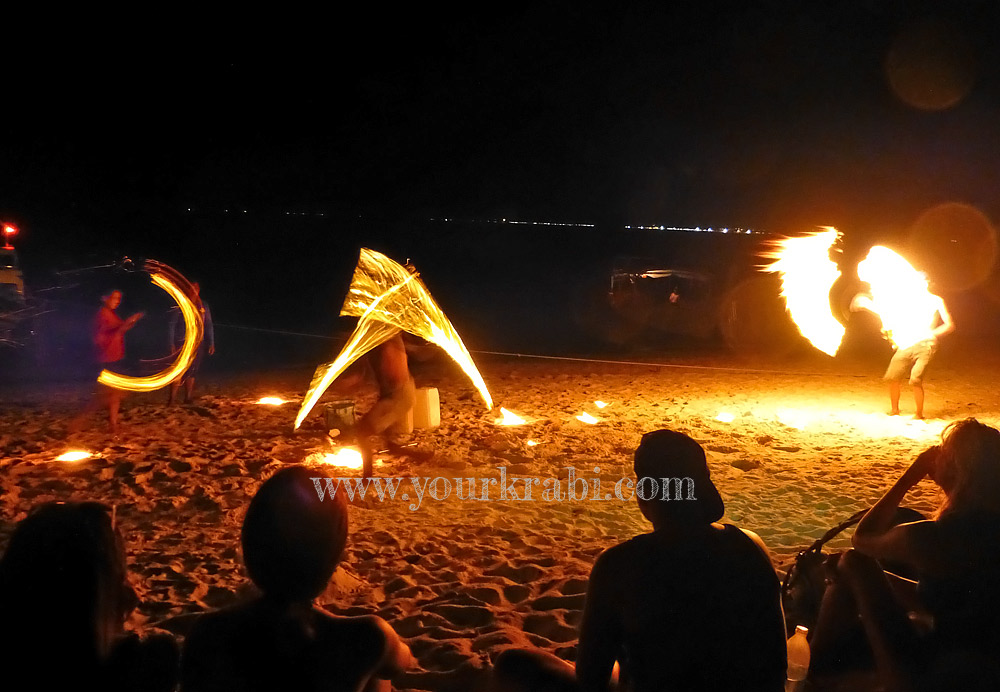 When this is over, we pile back into the boat and head back to shore under the stars. As it’s quite wavy at night, we are asked to move inside the lit cabin for the last stretch and the captain puts on some music to wake us all up. The last stop is back at Phra Nang Cave where our erstwhile guide jumps into the pitch black water and finds a shoal of bioluminescent plankton. Everyone jumps in and the lights are turned off on the boat so we can see the pretty glow under water. Splashing is encouraged as it leaves a trail of sparkles on the water’s surface. It’s magical. 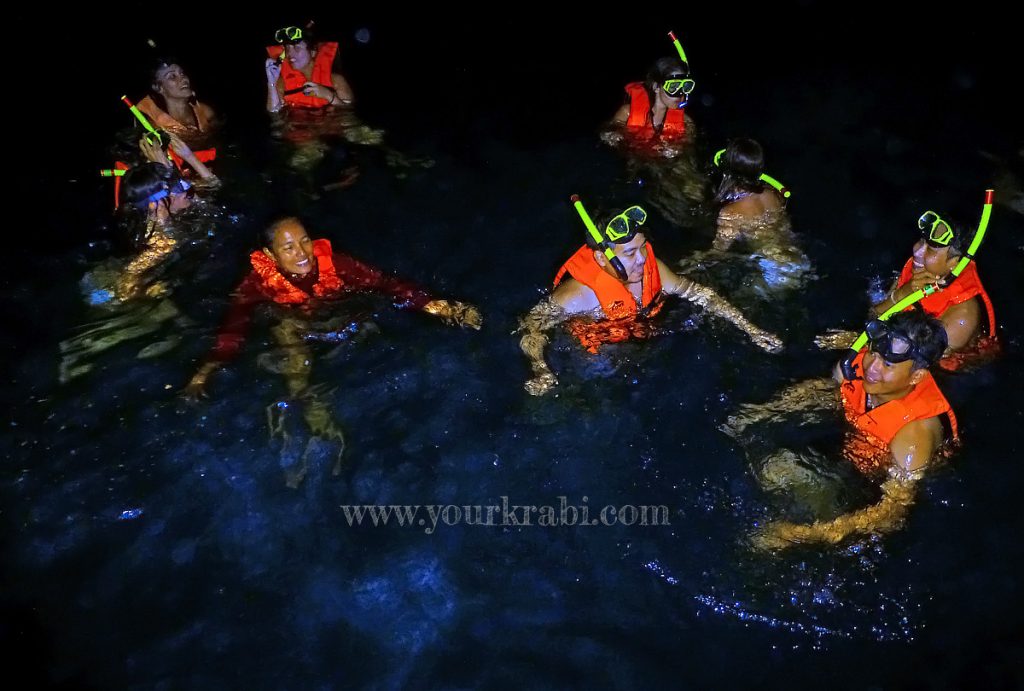 Finally we head back to the pier – it’s late and we are exhausted. But it has been a great day – a highly recommended tour for active people.